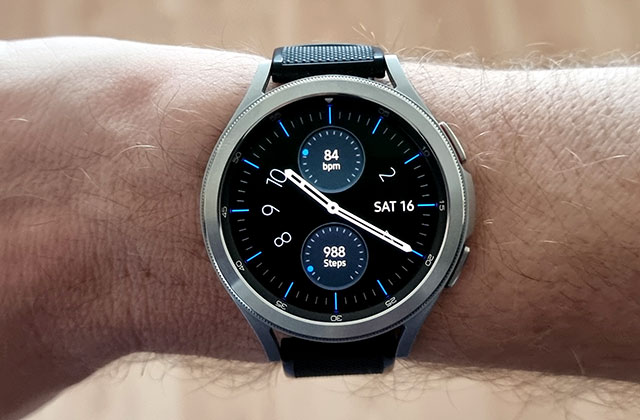 I’d been eagerly awaiting the Galaxy Watch 4 as soon as it was announced that it would be running WearOS.

Last year I tried the Fossil Watch Gen 5 as an alternative to my Galaxy Watch, and found it really hard to choose. In the end, I stuck with the Galaxy because I slightly preferred the look of it and it was better at health and fitness tracking.

My concern was whether the new Galaxy Watch 4 would be the best of both worlds… or the worst.

The short answer is that it’s somewhere in between the two.

The user interface is hardly any different to the previous Galaxy Watch models. Samsung has skinned the WearOS interface, including that of its own apps, to be as similar as possible to the Tizen interface of its older models. The watch is also set up and configured through the Samsung Wearable app rather than Google’s Wear app. You hardly know you’re running WearOS.

The only time you really notice the difference is when you install WearOS apps, and then the difference in look and feel can be jarring. For example, list items in Samsung’s apps and the general interface (including notifications) are contained in rounded boxes, and use a different font. This can be seen here, with Samsung Reminders on the left and Todoist on the right:

Fitness tracking also works best through Samsung Health. Google Fit is now available as an alternative, but if you want to use blood oxygen tracking, sleep tracking, or the new body composition monitoring, you’ll need to use Samsung Health.

I haven’t compared the new watch with other trackers, but it still has the problem that I noticed with my previous Galaxy Watch. When I record workouts, the recorded heart rate spikes much higher than I think is accurate, and can take a while to settle down. It will also occasionally stop tracking heart rate. The answer seems to be to tighten the strap during workouts, but it’s not a problem I had when I was using the Fossil watch. At least it does measure heart rate continuously throughout the day, which is something that WearOS doesn’t do well.

The performance of the watch seems to be on a par with its predecessor. Tracking long walks actively, which uses GPS to map your route, is still reasonably battery efficient.  I’m charging the watch every morning, to around 90%, and it’s usually got about 40% left by the end of the day. That’s with the always on display active and up to a couple of hours of actively tracking walks, in addition to general use.

I could easily get more than a day out of it, but charging is still very slow so I don’t want to be left needing a top up. The slow charging doesn’t bother me too much as I don’t wear the watch overnight, but if I did want to use it for sleep tracking I’d have to accept that it would be on the charger for at least an hour every day. As it is, I put the watch on the charger when I go to bed, and use a smart plug to switch it on about an hour before I get up. That way it’s ready when I want to wear it without leaving it on charge all night.

So how about the WearOS features?

First, and most significantly, you’re still stuck with Bixby rather than Google Assistant. Given that Google Assistant is baked in to Wear OS on other watches, it’s hard to see its omission from the Galaxy as anything other than a way for Samsung to continue to push Bixby. Google Assistant is supposed to be coming in a future update, but it remains to be seen whether it will be able to directly replace Bixby.

That lack of flexibility only really leaves one customisable button to launch apps. A double press on the home button can either launch the most recent app or the app of your choice. The other button customisations are more limited. The back key can be customised to show the list of recent apps instead of going to the previous screen and the only alternative to Bixby for the long press on the home button is to show the power menu.

I really hope Samsung relents and allows more flexibility on those options but I’m not holding my breath.

I wouldn’t mind so much if the app launcher worked in the same way as on previous Samsung watches. When on the home screen, a single press of the home button would bring up the apps list. On the Watch 4 the only option is to swipe up which isn’t as quick. In fact, you can’t associate an action with a single press on either button from the home screen. That seems like a missed opportunity for further customisation.

So what about apps?

Samsung has ported most of its Tizen apps and the watch comes preinstalled with a stopwatch, timer, compass, calculator and photo gallery amongst others. One of the reasons that I wanted to switch to WearOS, though, was to use other apps, and the results are mixed.

Google Maps is preinstalled, and you can also use Google Messages as the SMS app as an alternative to Samsung’s own. Google’s Gboard keyboard for WearOS can be installed as an alternative to the Samsung keyboard if you prefer a tiny QWERTY keyboard to the T9 input method that Samsung uses. The T9 approach is practical, given the size of the screen, but Google’s keyboard compensates for being fiddly by having better autocomplete.

The next app I tried was Todoist. When I first got the watch, speech input wasn’t working – it would recognise what I’d said but then crash when trying to add the task. That’s been fixed, and it’s now working fine. It’s also resolved an issue that I had with Todoist on my phone. Reminders would only show up when I unlocked the phone and turned the screen on, but the watch app ensures that I get my reminders as soon as they’re due.

The other app that I was hoping to use was Google Keep. I thought it would be useful to have quick access to short notes on my watch, but every time I open the app it gets stuck syncing notes. Uninstalling and reinstalling Keep resolves the problem – but just once. And only once. It works the first time the app is opened, and then it’s always back to syncing. From what I’ve seen, this problem isn’t limited to Samsung’s implementation of WearOS, and I’m not confident that it’ll get fixed any time soon. 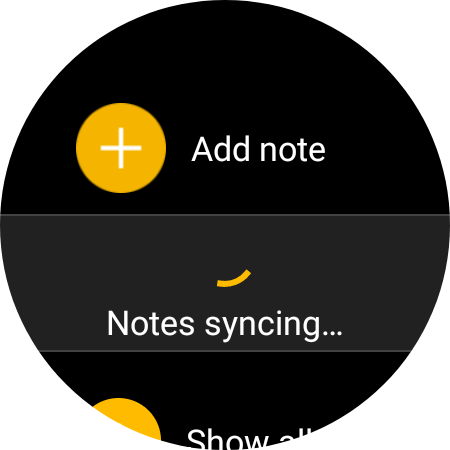 Overall, then, it’s a mixed bag. If you already have a Galaxy Watch and are happy with the apps that came with it then there’s no real need to upgrade. If you want a smart watch for Android, the new Fossil 6 might be worth a look. It won’t get the new WearOS release until next year, and hasn’t got as many health tracking features, but has Google Assistant and a more consistent look throughout the user interface.

On the other hand, the Galaxy Watch 4 retains some of the advantages that it had over the Fossil Gen 5. The watch faces show the complications – such as steps and heart rate – on the always on display, whereas the default faces on the Fossil only showed them when the screen was activated.  Battery is efficient when tracking workouts and, of course, there’s the rotating bezel, which is still a great way to navigate the user interface.

In conclusion then, it’s a mixed bag – it’s not quite as good as its predecessor at things the Watch 3 did, and not quite as good at the WearOS things as the competition. It’s a good compromise, though, and it has the potential to get better with future updates.

I just hope that Samsung relents and allows greater customisation.

Samsung and its ecosystem