Now that I’ve switched to WearOS for my watch, I’ve been looking for interesting apps.

There are a couple of automation options for WearOS. IFTTT has an app that can be used on WearOS but the more interesting option is the AutoWear plugin for Tasker.

It’s been a long time since I used Tasker, and it took me a while to get back up to speed. As I wrote at the time, Tasker is incredibly powerful but has a user interface that can best be described as challenging. Once you get the hang of it, though, it does get easier… eventually.

When you install AutoWear it will take you through a number of tutorial settings and confirm connection to your device. It will also install the companion app on your watch. Once it’s installed, you’ll find there are some settings that are managed through the watch app and some that require the phone app.

I’ve chosen to disable the shake detection option, as I don’t think I’ll use it and it was firing frequently enough to be a concern for battery life.

The “launcher apps” setting allows you to toggle the display of a number of predefined “apps”. These appear in the app list on your phone, but they’re not really apps – they’re quick links to trigger automations. When you tap on one of those apps, AutoWear sends the app name to Tasker as an event that you can act on. I’ll come back to that in a future post.

So what can you do with Autowear?

My first use case was inspired by a question posted on Reddit asking whether there was a tool for WearOS that could change the phone volume when the watch was charging. I’d installed AutoWear at that point but hadn’t really started playing with it, so I thought I’d see if it could be done. I liked the idea and it’s one that I’d find useful myself.

I leave my phone on silent all the time, as I get notifications on my watch instead. There is, though, a window while the watch is charging when I might miss notifications. Obviously it would be a pain to have to switch the sound back on manually every time I charge the watch.

It’s an easy one to automate with AutoWear, and it’ll help to illustrate how AutoWear and Tasker interact.

First of all, a bit of terminology. Automations in Tasker are driven by profiles. Think of profiles as the triggers for running automations. Profiles then consist of tasks – the actions that are carried out when the trigger fires.  You can also have conditions, and the logic can be as complex as you need it to be.

There are a number of different profile types. It’s easy to see how an event or a specific time can be a trigger but the one we need here is state.

So, for the watch charging automation, you start by defining a profile. Tap the plus icon to add a profile, select plugins, then the AutoWear plugin and then tap the pencil icon to select the state – in this case “plugged in.” Click the tick to accept and then go back to the profile screen. 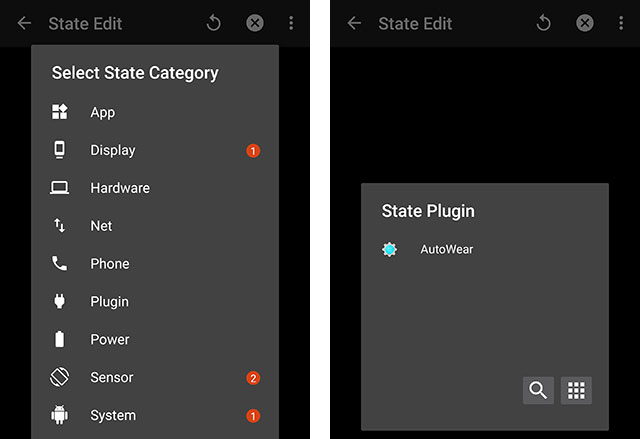 Next, tap to add a task. You can choose to name the task, but it’s not necessary for tasks that are connected directly to a profile. Click the plus button to add an action, select “audio”, then “sound mode”, and select the mode from the dropdown list.

This task will run when the profile is first activated – i.e. when the watch is placed on the charger.

Now you’ll want to add an exit task. It’s not immediately obvious, but to do so you long press on the existing task and select “Exit Task”. You can then create a task to reset the sound settings. The exit task will run when the watch is taken off of the charger.

When you place your watch on the charger, you should see a notification on your phone to tell you that the profile is active: 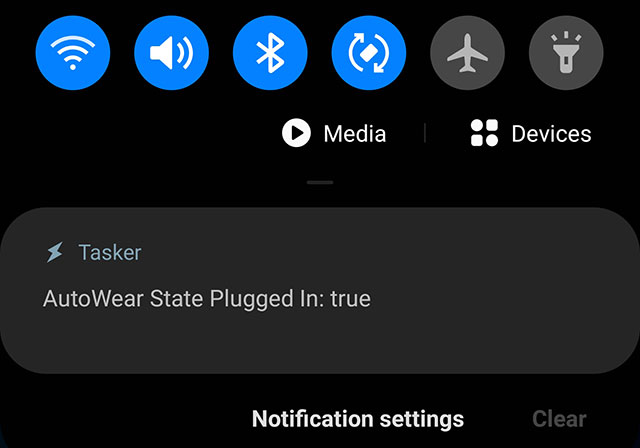 That’s one of the simplest examples of automation with AutoWear for Tasker and there is a lot more that you can do. Next time I’m going to look at how you can drive tasks from your watch…