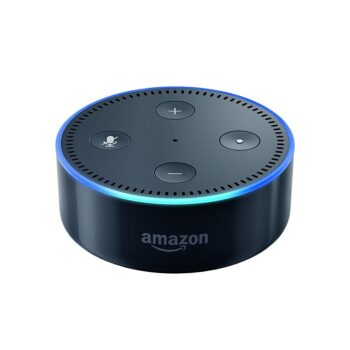 Over Christmas I got myself an Amazon Echo Dot, just to have a play with voice assistants at home.

I was thinking about waiting for Google Home to launch in the UK, but there’s still no sign of it and the Dot was cheap enough for it to be an experiment.

I didn’t need the full size Echo, as I’ve already got decent speakers, and Dot is also much cheaper than Google Home, which competes with the larger Echo.

My initial thoughts? Close but no cigar.

First of all the good. Integrating it with SmartThings to get voice control of my lights and smart switches was a piece of cake and it’s handy to be able to turn the lights on and off without going to my phone and using the app. Yes, I know, that’s what light switches are for and so it’s a problem I’ve created myself by having a smart bulbs. Nevertheless, it’s useful.

Music search is good too. Being able to ask it to play “that one that goes Harry Truman Doris Day” and having it find We Didn’t Start The Fire is fun (aside: I’m waiting for the updated version of that song that includes Brexit and Trump…)

Unfortunately that leads me on to the big problem. The Echo platform was clearly designed around the original speaker which was intended as the music output device. If you want to use the Dot to play music on another device it’s not so good. The Dot’s own speaker is fine for voice output but not what you’d want for music.

The issue is that when the Dot is connected to an external speaker, whether by the 3.5mm or bluetooth, all sound – including Alexa’s voice responses – goes via that speaker. You can’t separate the sound so that Alexa speaks through the internal speaker while streaming music to another device. It’s not as good as the Google Home’s ability to use Chromecast.

On the subject of music, it’s also a shame that you can’t have the alarm play music or stream a radio station. I have a 30 year old clock radio that can do that, but out of the box Alexa can’t. It can use a celebrity voice as the alarm, but there’s only one option in the UK at the moment and I really don’t want to hear Jeremy Clarkson shouting at me first thing in the morning. Or indeed at any other time.

It’s also a bit odd that you can’t use voice commands from Alexa to tell a Fire TV stick what to stream. It seems like such an obvious feature when both are made by Amazon.

So there are a few problems, but there’s also a lot of potential. I’ve already set up a few custom commands that trigger IFTTT actions and might have a crack at creating my own skills.

Overall I reckon it was worth it, although I wonder how much I’ll still be using it in six months time!