Despite my reservations, I traded in my Samsung S8 for a Pixel 2…

I cracked. The lure of pure Android and the Googley extras finally tempted me, helped by a pretty good trade-in deal. I went for the smaller Pixel 2 rather than the 2 XL because I find bigger phones too unwieldy, so I’ve ended up with a new phone that has a smaller screen and smaller battery than my last one even though it’s about the same size. It also lacks the Micro SD slot of the S8 and the water resistance isn’t quite as good.

Was it worth it?

First of all the good. 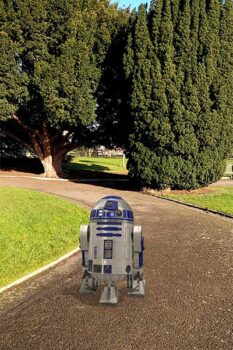 It gets updates quickly. I’m already on Android 8.1 with the January security patches. There’s no bloatware other than some Google VR and AR stuff that I probably won’t use much, if at all.

The camera is class leading, although in real world use it’s not that much better than the S8.

The AR stickers for the camera are fun to use once or twice. I quite enjoyed having R2D2 trundle around a local park, although I can’t see it being something I’d use very often.

The sticker results vary from reasonably convincing to obviously pasted in – as you can see from the example, R2’s shadows aren’t quite in the right direction and are nowhere near as dark as they should be.

Now onto the OK.

While it’s nice to be able to stick a micro SD card in for extra storage, I don’t think I’ll really miss it. It’s got enough storage on board for me and there’s unlimited cloud storage for photos taken on the phone, albeit for a limited period.

Then there’s the lack of a headphone jack. It’s not a major issue as there is an adapter in the box, but I thought I’d get into the spirit of it by picking up some bluetooth headphones. I’m in two minds.

I don’t miss tangled cables and I like being able to put my phone in any pocket – not just one that’s convenient for the headphones. On the other hand I have been left high and dry on a long walk with dead headphone batteries. I’ll call that one a draw.

Battery life has to come under the OK banner. It has a slightly smaller battery than the S8 but in theory the greater efficiency of Android 8, lack of bloatware and smaller screen should even things out. For the most part it does but it seems less consistent and on average I’d say it’s not lasting as long.

I can make it through the day, though, so it’s good enough.

Then there’s the bad.

I criticise Samsung for their bloatware but some of their additions to stock Android make a lot of sense and I’m missing them on the Pixel.

On a Samsung phone there’s a three way toggle in the notification shade for controlling the sound of notifications. You can toggle between normal, silent and vibrate:

On the Pixel you can only mute sound notifications but the phone will still vibrate.

Speaking of notifications… the launcher has a notification dot feature that sort of serves the same purpose as unread notification badges in other launchers but without an actual number.

The problem is that they show up for unread notifications, not unread messages. The dots duplicate the notification icons: 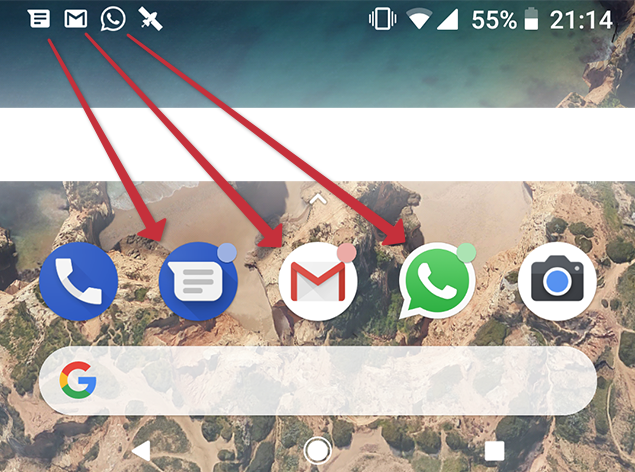 The dots disappear as soon as you clear the corresponding notification, while actual unread message counts on both the Samsung launcher and Nova remain until you actually read the message:

I clear notifications as they come in but I still want a visual indicator of which apps have unread messages so I don’t forget them.

The S8 also had more control over vibration, with the ability to set the intensity separately for calls, notifications and feedback, as well as a selection of vibration patterns. The vibration motor also felt smoother than the one on the Pixel.

For me the Pixel 2 has been a interesting lesson. I switched to Samsung after having Nexus phones. From the S6 to the S8 I loved the hardware but the slow updates bugged me and I felt I was missing out on that pure Android experience. It was an itch that needed scratching.