I’ve heard the saying that once you go Mac you never go back… well, I went back…

My main desktop has been a 27″ iMac. It’s the 2012 model but it’s still going strong. It was meeting all of my needs and there was no reason to upgrade. Until recently, that is. I’ve been wanting to experiment with digital art for a while, and that will include rendering. I’ve also started using a couple of pieces of software that make heavy use of the graphics card, and that’s where the iMac is starting to struggle.

Of course, being an all in one, there is no option to upgrade anything except the RAM, so I started looking for a replacement. I figured nearly seven years use was a pretty good return on the original investment and – with my propensity to replace my phone every year – it’s amazing that I’ve kept any piece of tech for so long.

I started out by looking at the current generation of iMacs but sadly came to the conclusion that I couldn’t justify the price premium. It’s incredible to me that in 2019 the default spec has a hybrid SSD drive instead of a pure SSD for boot and Apple’s memory upgrade pricing is insane: 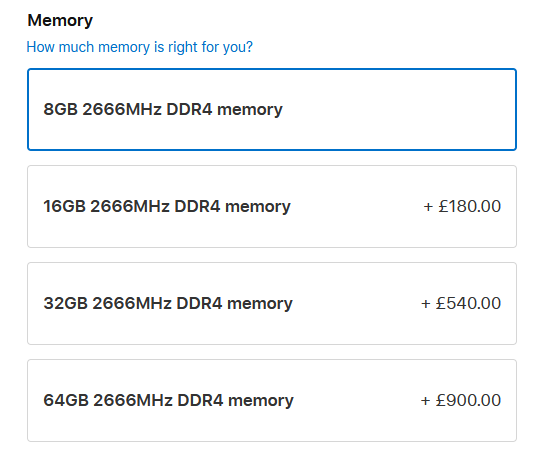 Some basic research showed that I could spec a Windows PC that was more powerful in every regard for less than half the price of an iMac, even with the need to buy a screen. The advantages of OSX over Windows simply weren’t enough to justify the difference.

Once I started looking for a Windows machine, I quickly ran into a paralysis of excessive choice. AMD vs Intel, NVMe vs SATA, Nvidia vs AMD GPUs, RAM speed – every single component comes with a variety of options, even before you get into brand decisions. In the end I gave up and bought an off the shelf Dell that was close to the spec I wanted and just upgraded the RAM myself. The cost of upgrading the memory from 16GB to 32GB was around £70, which puts Apple’s pricing into perspective.

I did have to buy a screen, and the QHD screen I chose isn’t as good as the 5K screens in the current iMacs, but it’s comparable with the iMac I’m replacing. I also had to pick up speakers, but I just got the cheapest ones I could find, as I only need them for the occasional YouTube video and system sounds.

Overall the PC and screen, including the upgrades, came in at not much more than two thirds of the cost of an iMac that would still have had a weaker processor, weaker GPU, less memory and less disk capacity. Windows isn’t that bad that the price difference is worth it… is it?

So far Windows hasn’t annoyed me too much, but that’s probably because I haven’t had many updates yet. OSX does a better job of keeping out of the way, whereas Windows always seems to need more attention – I’m gradually working my way through notifications that I don’t need and trying to find ways to silence them.

It’s also less consistent. Windows 10 is getting there slowly with the new interface but occasionally it’ll throw you into an older style window. I assume the Windows developers are gradually working deeper into the system to update the user interface, as the old style is mainly used by things like Device Manager that most users will rarely open. 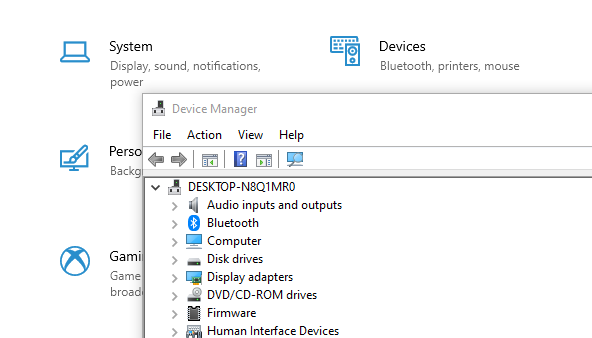 For the most part, though, choice of OS doesn’t matter. All of the software I use is available for both Mac and Windows, or at the very least there are suitable alternatives, and once you’re using an application it doesn’t really matter what OS is sitting behind it. The simple fact is that Windows lets you choose hardware that gives you so much more for your money.

The question is, will I come to regret it? Will this Windows PC last me as long as my old iMac or will Apple prove to be a better long term investment? Will the little things that Windows doesn’t do as well come to annoy me? Only time will tell…