Following on from my Samsung Galaxy vs Fossil watch comparison post a couple of weeks ago, I decided to do a proper comparison of the fitness tracking.

It’s cold enough out now that I need to wear long sleeves and don’t feel like such an idiot wearing two watches, so on a walk after work I wore both and set them both to track my workout. I used Fossil’s activity tracker, rather than Google Fit, in order to use GPS on the watch rather than phone.

As I said in my review, I get some anomalous heart rate readings from the Galaxy Watch, and on this occasion it affected the entire walk. The Galaxy registered a high heart rate of 153bpm with an average of 129bpm. The Fossil watch averaged 105bpm.

Superimposing the graph from Google Fit (blue line) over the Samsung graph (red/orange line) showed that both followed the same pattern with a fairly consistent difference. 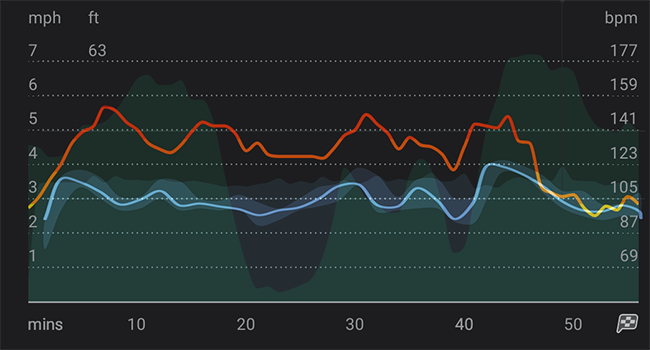 I’d need a third device as a tie breaker to determine which of the two is right, but I’ve got to assume the Fossil Watch was the accurate one. I’m pretty sure I’d feel it if my heart rate hit 153bpm. The spikes at around the 45 minute mark on both watches coincide with the steepest hill of the walk, but I never felt breathless.

It’s a big difference, and one that renders the results from the Galaxy Watch largely meaningless. It’s not a consistent problem and only seems to go wrong when I’m walking. Resting heart rate between the two watches is pretty even.

The Samsung watch also thought I was going a little faster:

That one’s easy to explain. The workout tracker on the Samsung Watch is very quick to pause workouts when you stop. Every time I had to stop to cross a road, the Samsung Watch paused the workout, so that time didn’t count towards my pace. The Fossil tracking didn’t pause at all. It’s a nice feature of the Galaxy Watch, but not essential.

Elevation is another strange one, as the Galaxy Watch thought the high point was 66 feet, while the Fossil Watch had a wider range:

The Fossil Watch got this one right as well. My house is about 100ft above sea level.

It’s a shame. I still prefer the user interface of the Galaxy Watch but it lacks the smart features of WearOS and seems to be less accurate as a fitness tracker. It all seems to point to the Fossil watch being the one to pick but it comes back to form over function… and that’s more important in a watch than in many other devices.