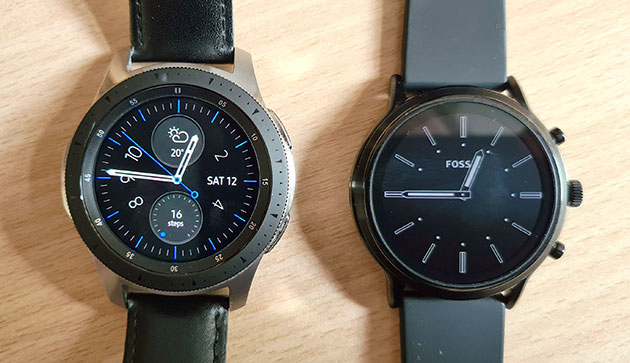 When I reviewed calorie trackers recently I mentioned, in passing, that maybe I needed a dedicated fitness wearable.

I’m terrible when it comes to new gadgets. Once the itch has started I need to scratch it. Having done some research, though, I realised that I probably wouldn’t be happy with a dedicated device such as a Fitbit. I prefer watches that look like watches, and I like true smart features. Perhaps it was time to look at WearOS again. I like my Galaxy Watch, but the app selection is limited and I was frustrated by the inability of Samsung Health to export more than the most basic of step count data. Google Fit is more flexible and WearOS is better supported by third parties.

I jumped in at the deep end, as I tend to do, and bought a Fossil Gen 5 watch. The Gen 5 is about as good as WearOS currently gets, and felt like a fair comparison to the Galaxy Watch.

So how does it stack up? Which watch is best? The short answer is that I don’t know. There isn’t a clear winner.

When it comes to the display, though, the Galaxy Watch is the clear winner. The always on display can use colours and show more information, with watch complications such as date and step count always visible. The always on display is bright enough to read in most light and the lift to wake gesture takes care of brightening the screen further when you need it.

By default, the always on display of the Fossil Watch just shows the time. Some third party watch faces can show more, but at the expense of battery life. The lift to wake gesture has such an adverse affect on battery life that I switched it off, settling for tap to wake instead.

Battery life is a problem for the Fossil Watch, which will just barely get through a day of light to medium use. The Galaxy watch, on the other hand, comfortably lasts a couple of days. The flipside is that the Fossil Watch charges really quickly, so it’s easier to top it up in the morning. The Galaxy Watch can take a couple of hours to charge if the battery is low.

In the pre-coronavirus era, the wireless charging of the Galaxy Watch was an advantage. If I was away from home, I could charge it from the back of my phone. That meant that if I got caught out at work, having forgotten to charge it in the morning, I could easily top it up. If I went away for a weekend, it was one less charger to take with me.

These days, I’m never away from home for that long, so the benefit is reduced.

Another area where the Galaxy Watch shines is the user interface. It’s fast and responsive, and the rotating bezel is a much better way of interacting with the interface than the rotating crown on the Fossil Watch. The rotating crown doesn’t work with all apps, forcing you to swipe up and down instead, and it can be fiddly to use.

WearOS has a reputation for being sluggish. I didn’t think it was too bad on the Fossil Watch, but occasionally it lagged and was slow to respond to touches. Launching apps was a mixed bag and some took so long to launch that the screen had timed out by the time they were open. Generally, though, it was perfectly usable even if it wasn’t as quick as the Galaxy.

A single press on the Fossil’s crown button launches the application selection screen, and a long press launches Google Assistant. The side buttons on the Fossil Watch can be mapped to specific applications, which is a plus point – I mapped one to launch the Google Fit workout selection.

The watches have different approaches to an onscreen keyboard. The fossil watch has a Qwerty keyboard, that despite being tiny, is surprisingly usable. The Galaxy Watch has a T9 keyboard, that makes sense for the small screen, and is reasonably usable for those of us old enough to remember when that was the only option for text input on phones.

Voice input is available on both watches, but the voice to text provided by Google on WearOS is much better than Samsung’s effort.

Out of the box on the Fossil watch there are two choices for tracking workouts – Google Fit and Fossil’s own activity tracker. Google’s option has a wide range of activities, but Fossil just distinguishes between indoor and outdoor activity – the distinction is that the latter activates GPS. I’m OK with that – if it’s just using heart rate to measure intensity, that seems reasonable. For basic fitness tracking, it doesn’t really matter whether I’m walking, cycling or running – what matters is how much I’ve elevated my heart rate and for how long.

The two options take a different approach to GPS for outdoor activities. Google Fit will link to your phone’s GPS if available, whereas the Fossil tracker will always use the GPS sensor on the watch. The tradeoff is battery life. Google Fit will impact your phone battery , while the Fossil tracker will hit the watch battery. Phones obviously have far more battery capacity, so the Google Fit approach makes sense, even if it did mean that I got constant warnings from my phone about the app consuming battery.

GPS is a major drain on the Fossil Watch. A 45 minute walk drained about 15% of the battery of the watch.

The Galaxy Watch, on the other hand, seems to use the watch GPS but without such a major impact. I can track a long walk on my Galaxy Watch without being overly concerned about killing the battery of either the watch or my phone.

Accuracy is hard to judge, but on longer walks the step count and distance is consistent between the two watches. Heart rate is similar, but often reads a little higher on the Galaxy, which is also prone to occasional false readings – sometimes giving a heart rate above 140 when I’m pretty confident I’m not exerting myself at all. Thankfully those misreadings are rare enough not to matter, unless you’re very particular about your stats.

Ending workouts on both watches seems to take one tap too many, first to select the activity, then to pause it, and then to end it – with Samsung also then asking for confirmation.

Both watches show notifications and allow responses for certain types of notification, such as canned quick responses to messaging apps. On WearOS notifications just show the text and app icon, whereas the Galaxy Watch will show profile pictures for messaging apps such as Whatsapp. Both can show picture notifications, such as the ones that I generate through Pushover to show snapshots from my security cameras.

Both allow interaction with notifications that support it, such as marking reminders as complete.

Notifications in WearOS are shown as a list, much like the notification pull down on the phone. They’re perfectly functional, but I prefer rotating through notifications on the Galaxy Watch.

The app selection on the Galaxy Watch is fairly limited. The basics are there – stopwatch, timer, calculator, SMS and phone – as well as a limited selection of third party apps. Spotify is available for offline music, and there are some additional fitness tracking apps. Otherwise you’re limited mainly to Samsung’s ecosystem – Samsung Reminders is available, as is SmartThings for home device control.

WearOS has a similar basic set, although text messaging requires Google’s Messages app to be the default SMS app on your phone.

Maps are available on both watches. WearOS, as you’d expect, uses Google Maps, but the Galaxy has to rely on third party options, with the most prominent being Here Maps.

One notable omission on the Galaxy Watch is a way of synchronising with a mainstream note taking app. Sometimes it’s useful to take a note that isn’t specifically a reminder and even more useful to be able to view notes for reference. WearOS has Google Keep, which isn’t my note app of choice but at least it gives me an option. Samsung does have its own Notes app for phones and tablets, so it’s a little surprising that it hasn’t created a watch version.

Finally, voice assistants. The winner is obvious. Google Assistant is far superior to Bixby, especially if you already use it elsewhere and have it set up for smart home control. I have read that Assistant can be flaky on WearOS, but so far I haven’t experienced any problems.

The conclusion is… that there isn’t one.

Ultimately, for me it comes down to a choice between the better overall user experience – battery life, display and user interface – of the Galaxy Watch versus the smarter feature set of the Fossil Watch.

That’s what makes it a tough choice – there is no clear winner. Both are good smartwatches. I probably need to live with the Fossil Watch long enough to establish whether I make full use of its extra smarts – it could be that those features are things that I’ll use once and then forget.