No sooner had I started using Samsung Health than Samsung announced the retirement of a key feature.

According to an end of service notice sent to users in Germany, Samsung is removing caffeine, calorie, and weight tracking from Samsung Health. Other regions have also had the same notice, and it’s not clear whether the feature will be removed in the UK.

I found the weight tracking really useful as part of my plan to get in better shape. The weight management feature took the difference between calories eaten and calories burnt and compared that against a target. Using the standard benchmark of a 500 calorie daily deficit to lose 1lb per week, it would then show me if I was on track.

Calories burnt came from my Galaxy Watch and I could enter the food I’d eaten into the app to get the calorie input. It wasn’t perfect, but having everything in one place in the Health app outweighed the limitations.

In anticipation of the loss of the calorie tracking feature from Samsung Health, I decided to look into some alternatives. I’ve been assessing MyFitnessPal, Nutracheck and MyNetDiary to see which – if any – I’d want to use. All of them have barcode scanners for identifying food and offer interfaces to other apps and devices for exercise tracking.

There’s not much to say about MyFitnessPal. I hated it from the start. The app is slow to start, cluttered and I found the database to be inaccurate. Searches would often return several items, making it necessary to check the nutrient values before selecting the items. Having assessed the alternatives, I quickly moved on and my testing focused on MyNetDiary and Nutracheck. To give them both a proper trial I logged all of my meals in both apps for a week. 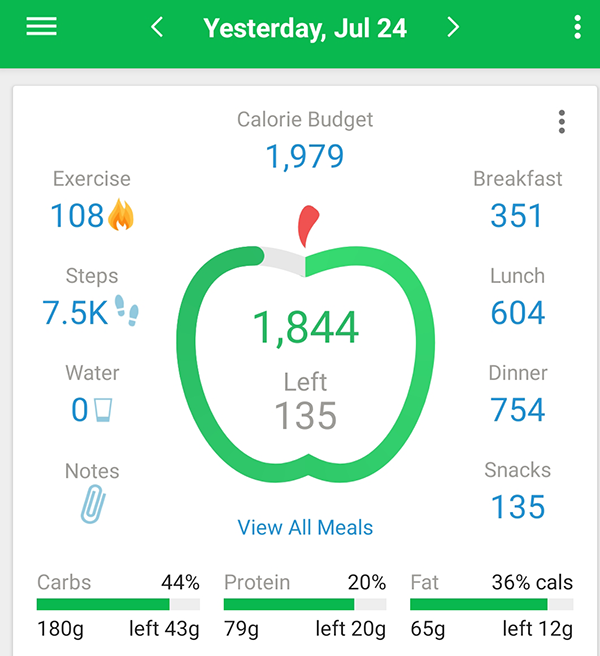 MyNetDiary can be used for free. The free tier covers the basics, with a premium subscription to unlock additional features. The app shows a padlock icon against locked features, making it easy to see what they are at a glance, and there’s a free trial available if you want to try them out. Subscriptions are $59.99/year, which has somehow translated to £58.99. Someone’s taking advantage of the exchange rate, but it might be Google – purchases are made as subscriptions through the Google Play Store.

Logging food is quick and simple. The barcode scanner is fast and accurate and the database seems to be pretty comprehensive. I did find that some of the nutrition values were a little off – a few grams here, a few calories there – but not by enough to make a material difference. You can store favourite meals and food items, and it’s easy to copy meals from one day to the next. I always have the same thing for breakfast, so entering my breakfast is as simple as tapping on “Copy from previous breakfast”.

The home screen shows a nice overview of the day. The calorie budget is an estimate of how much you can eat to stay on target for your chosen weight loss. You can choose to add exercise to increase the budget and the exercise data can be entered manually or through a variety of different apps and devices. MyNetDiary can take data from Apple Health, Google Fit, Samsung Health, Fitbit, Withings and Garmin. If you’re adding exercise to your calorie budget it’s important to set your activity level to “Sedentary” to ensure that you’re not double counting – active activity levels already assume you’ll be doing a certain amount of exercise.

Unfortunately the only information that it can receive from Samsung Health is the step count and not other logged activities or heart rate. That’s a limitation of Samsung Health, though, rather than MyNetDiary. It can, however, send food data back to Samsung Health – at least while food tracking is still available in Samsung Health. 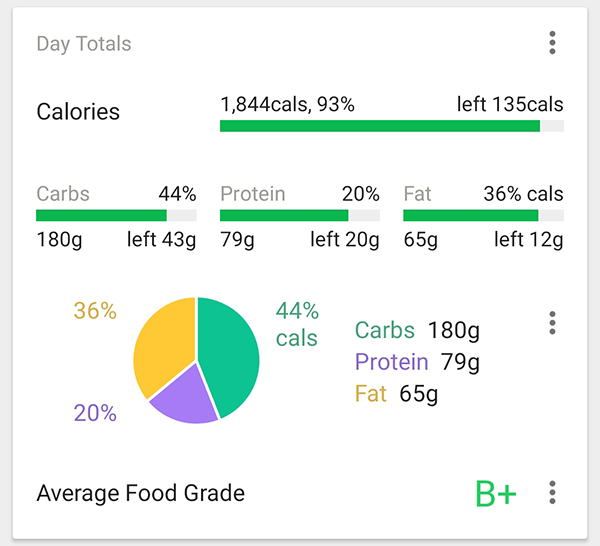 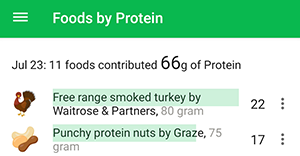 MyNetDiary gives you an almost overwhelming amount of information. You can break down your day total and individual meals by nutrients and also see which foods contributed to each nutrient. If you’re after stats, MyNetDiary will not disappoint.

It also does a good job of explaining where the figures and targets come from for nutrients, usually based on the US Dietary Reference Intakes. These can vary slightly from the equivalent UK guidelines, but the basic principles will obviously be the same – Americans are, after all, the same species 😉

The US origin of the app is also apparent in the use of pounds for body weight – I’d prefer stones and pounds, as that’s how we tend to think of weight in the UK. If you choose to track water intake, the unit is the fluid ounce, which isn’t standard in the UK. You can switch to millilitres but only by switching to metric units throughout which will then show your body weight in kilos. Other food entries allow you to choose between grams and ounces for each entry, and the breakdown of nutrients uses grams without having to set metric units, so it’s strange that water is the exception.

Those are minor quibbles, though, and don’t detract from what is a really comprehensive app. 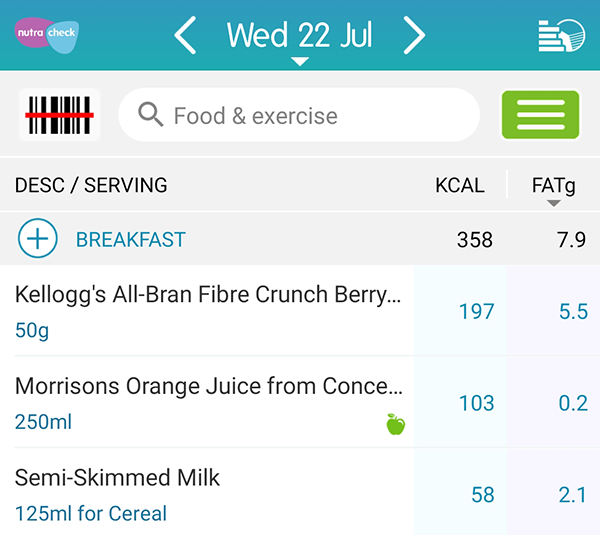 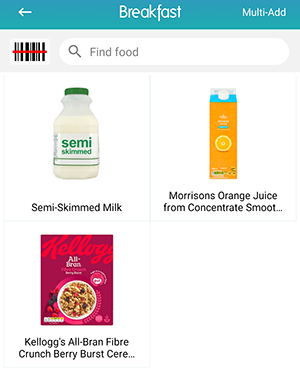 Nutracheck is a UK based company and has the best food database for UK users. Products have pictures of the actual packaging, making it easy to confirm that you’ve found the right product. During my testing, it identified everything I scanned. The breakdown of macronutrients was always an exact match to the packet.

I found the barcode scanner to be slower and a little more finicky than the one in MyNetDiary. It worked, but sometimes I had to move my phone backwards and forwards while it focused.

Like MyNetDiary, Nutracheck has the ability to create custom meals if you regularly have the same combination of food items.

The database includes restaurant meals, and again the UK bias is an advantage. Search for, for example, a Big Mac you’ll find the UK version – with a picture to match. The other apps will show the US version unless you specifically search for “Big Mac UK”. The UK factor is also apparent in the weight targets and tracking, as they’re based on stones and pounds rather than just pounds.

The home screen for the app shows itemised meals at the top with progress at the bottom. I prefer the summary screen in MyNetDiary, as it shows more information at a glance.

The goal is based on a calorie target to achieve your desired weight loss with exercise added and food subtracted to give an allowance remaining for the day. As with MyNetDiary it’s best to set your activity level low in the app if you’re going to pull in exercise data.

Pulling that data in is where it falls down compared with the other apps. The range of integrations with other systems and devices is far more limited. On Android you can import activity from Fitbit or Google Fit, while Apple users can integrate with Apple Health.

Nutracheck concentrates on the basics of calorie tracking, which it does very well, but it doesn’t keep up with MyNetDiary when it comes to additional features.

Both are great apps and a vast improvement on the simple tracking (currently) available in Samsung Health.

If you’re in the UK and have either a Fitbit or an Apple Watch then Nutracheck is a great choice, but it’s MyNetDiary that gets my vote. I prefer the way the information is presented, and I like its wealth of information and ability to interface with more external sources than Nutracheck.

But do I really need a calorie tracking app? Are they worth the money? And, as I near my weight target, do I really still need to keep tracking my calories? I think the answer to all of those questions is yes. I’ve found calorie tracking invaluable for losing weight and it will help me stick to my target weight. I’ve been surprised at just how bad certain treats are, and, while I fully intend to indulge from time to time, it’s good to know exactly what effect they’re having.

Barcode scanning has been a revelation and it’s so convenient to add the meals that the few minutes a day it takes are worthwhile. Even if Samsung Health kept the food tracking feature I’d still use MyNetDiary to enter the food and have it synchronise with Samsung Health – it’s just that much more user friendly.

While MyNetDiary can be used for free, I also feel that it’s worth paying for a valuable service. The apps, cloud service and food databases cost money to maintain – and perhaps that’s one reason for Samsung to drop the feature from their own Health app. Paying a company that does one job and does it well makes sense and helps to ensure that the service is maintained.

The only downside to an external app is that Samsung Health can’t export exercise data. Even the step count doesn’t tell the full story – if I go for a brisk exercise walk up and down the local hills, I’ll burn far more calories than I’d burn on an gentle stroll around town. That information is captured by my Galaxy Watch – it’s just all locked up in Samsung Health. Perhaps I need to consider a dedicated device from the likes of Garmin or Fitbit… any excuse to shop for gadgets…