Microsoft has a new browser with an old name. The Edge browser, that’s been around since 2015, has been replaced with a brand new browser that’s also called Edge and it’s proving controversial.

The original Edge browser was Microsoft’s attempt to move on from the legacy codebase of Internet Explorer and launch a modern browser to compete with Google’s Chrome. It didn’t really work. Edge wasn’t a bad browser but it didn’t gain any traction.

The new version of Edge is based on the same underlying rendering engine as Google’s Chrome – as well as other browsers including Opera and Samsung Internet.

HTML is a standard, but rendering engines can interpret that standard in subtly different ways and that has always been a problem for web designers. When a website looks different depending on the browser, that’s down to the rendering engine. The differences are mostly minor cosmetic things, but occasionally a site simply won’t work.

Even though multiple browsers share a common engine, it doesn’t mean that there’s nothing to choose between them. Each browser has its own implementation of features on top of the core engine, such as bookmark management, password management, synchronisation between devices, and support for plugins.

So why is the new Edge browser so controversial?

It’s not the browser itself that’s the problem, but rather the way that Microsoft seems to be aggressively pushing it on Windows users. With the latest Windows updates, Microsoft has replaced the old Edge with the new version and appears to be resorting to somewhat questionable tactics to get users to switch from other browsers.

It would be a shame if that put people off the new Edge, because it’s a pretty good browser. I’ve been using it instead of Chrome for a while, and haven’t felt the need to switch back. To get the full experience, I’ve been using it on my phone and tablet as well as PC.

As you’d expect, Edge uses your Microsoft account to synchronise data between devices where Chrome uses a Google account. Otherwise the sync features are broadly the same – passwords, bookmarks and plugins. History doesn’t sync yet, but the feature is “coming soon”.

The default homepage can be configured to show an image of the day, quick links to frequently used pages, and a news feed. Chrome offers the same options, with the exception of the news feed – for some reason that’s a feature of the Android version but not the desktop. I’ve disabled the news feed in Edge, as it slows the page down, isn’t very customisable, and is mostly full of clickbait and other junk.

Despite the news feed junk, the Edge browser does seem to take security seriously. Options for controlling tracking are laid out clearly and explained to a non-technical audience. 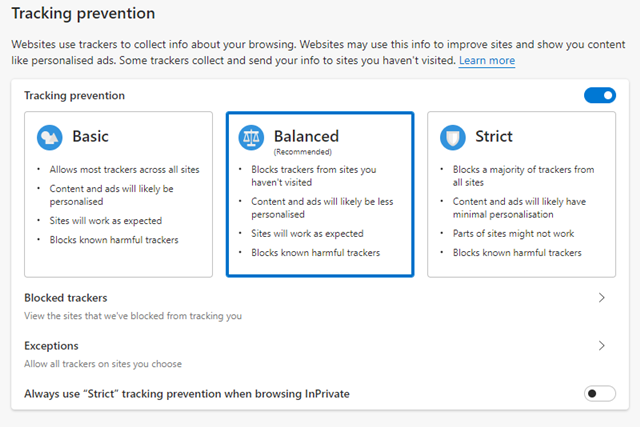 Aesthetically, I prefer Edge to Chrome but I realise that’s a very subjective choice. The design just feels a little cleaner and more modern to me. Like any subjective choice, it’s hard to put a finger on exactly why I prefer it.

Edge has the ability to install websites as apps on Windows, so that they appear as standard applications and can be added to the start menu.

Chrome can do something similar, but the implementation in Edge is, I think, a little more seamless. Google’s implementation distinguishes between true progressive web apps and shortcuts, while Edge can install any site as an app. As a rule of thumb, if a site would have its own app on Android, such as Youtube and Twitter, I’m installing it as an app on Windows.

On Android, it has a key feature that is really useful. Phones are getting taller, and controls at the top of the phone are inconvenient. You either have to stretch a thumb too far or use both hands. Many apps are starting to realise that, and make their user interfaces thumb friendly by placing controls at the bottom of the screen.

The feature is nicely implemented in the Edge browser, with a menu at the bottom of the screen that disappears as you scroll so that it doesn’t take up screen real estate when it isn’t needed. All of the menu features are available through a customisable menu that is expanded by tapping on the three dots in the bottom menu bar.

It’s not perfectly implemented. The tab view screen shows open tabs as a series of square preview icons starting from the top of the screen. Chrome’s approach of full screen cards is more thumb friendly, even if the rest of Chrome fails. Google is apparently working on its own solution to thumb friendly menus, so Edge may lose that advantage soon anyway.

As you might expect from a Microsoft browser, the default search engine is Bing. It’s possible to change the default, but the behaviour is inconsistent. On Windows, changing the search engine only affects searches made through the address bar. The search box on new tabs still uses Bing.

On Android, the address bar appears in the same place as the search box and uses the chosen search engine, which makes the switch from phone to PC feel inconsistent. Even more inconsistently, the voice search on Android uses Bing even when the text box uses Google. 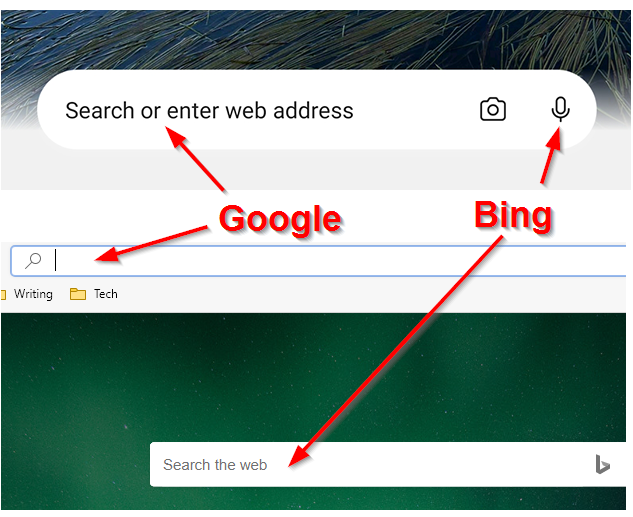 Despite these minor grumbles I’m sticking with Edge for now. It feels a little contrarian to be using Edge on Android, but then I already use OneDrive to backup my photos thanks to a change that Google made last year, so I’m used to a hybrid Microsoft/Google experience.

I might change my mind if I ever fully jump ship to the Google ecosystem, but I kind of like hedging my bets, especially with Google’s track record on killing services.