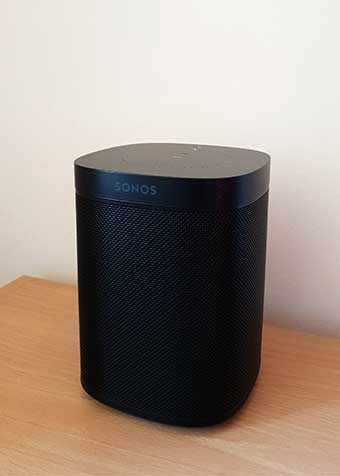 I’ve finally joined the Sonos camp for most of my home music.

I think there were two things that prompted the decision to jump into the Sonos system.

Firstly, I wanted smart speakers that could be integrated into my home automations and Sonos looked like a good bet.

Secondly, it was the launch of the Sonos One. The One is basically an entry level Play:1 with Alexa built in. You can think of it as an alternative to the full size Echo but with substantially better sound quality. It allowed me to add quality music playback and voice control into another room with a single device.

I was surprised by the sound quality from such a small speaker. It’s slightly shorter than the Echo but wider and much heavier – more than twice the weight. It’s the weight that gives it surprisingly substantial bass.

The Alexa integration is good but not complete. It can’t do everything that a normal Echo device can do. It lacks Audible, for example, which was a disappointment. It’s also missing the drop-in feature, but that’s not really something I’d use. Most basic commands do work though, including home control, reminders and alarms.

You don’t need the Sonos One to get Alexa integration for playing music. There’s an Alexa skill that will let you do that with any Sonos speaker. The main difference is in how you trigger the music. If you’re talking directly to a Sonos One you can simply say “Alexa, play…”.

If you want to play music on another Sonos speaker – or even on a Sonos One triggered from another Alexa device – you have to say, for example, “Alexa, play … in the bedroom”. Note that you have to name the target speaker every time. If you use, say, an Echo Dot to start music playing on a Sonos speaker, and then ask the Dot for a different song without naming the speaker, it will play the song on the Dot.

That’s a slight pain. Google Assistant works slightly differently with Chromecast devices, in that it will remember where the music is playing and continue to use that device.

Unfortunately Google Assistant doesn’t currently support Sonos, which is a bit strange. If you’re using an app such as Google Play Music you can select your Sonos devices as casting targets, but you can’t do the same with voice commands to a Google Home.

I suspect the Google integration may improve. Sonos will be adding Google Assistant as a second option for voice commands on the Sonos One, and I’d be surprised if that didn’t bring better integration with other Sonos devices.

Volume control with Alexa is another area that could be better. It’s just not granular enough, only allowing whole numbers between 1 and 10. Sometimes that jump is too much, and I’ve found I’ve had to go the app, or the physical volume controls, to set a suitable interim volume. A percentage scale would be better, especially at low volumes when that 10% jump can take the music from too quiet to hear to intrusively loud if you’re using it to get to sleep or as gentle background. 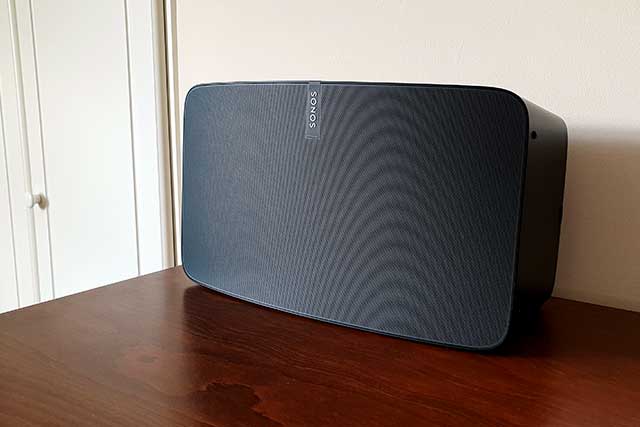 The real selling point of Sonos is multi-room audio. You can group speakers in the app and then your music will play on all of them, perfectly synchronised. Again, it’s not fully integrated with Alexa. Sonos speakers can’t participate in Amazon Alexa groups and you can’t use voice controls to group them.

It would be good if you could create named groups – “everywhere”, “upstairs” etc – and then ask Alexa to use those groups – “Alexa, play … everywhere”. That’s how the native grouping works with the Echo.

The grouping is useful, though, and it can be controlled through the API. This makes it possible to group and ungroup speakers through home automations – including voice triggered automations.