Anyone know where you can get good humble pie? Back in 2016 I wrote a post about my decision to stop using Evernote…

The price hike at the time tipped it into the realm of being one luxury too far. Evernote was far from essential – with my Office subscription I already had access to OneNote and with my Google account I could simply use Docs or Keep. While I still liked the product, it was hard to justify the expense. I left the big green elephant behind.

The separation didn’t last long. I’ve been back with Evernote for a while and I’m using it right now to draft this blog post.

So what changed my mind?

First and foremost for me is the ease with which it’s possible to leave Evernote. Yeah, I know that sounds counter intuitive, but bear with me…

I’m nervous about having my notes in a proprietary system – especially a cloud based one. Evernote has much stronger export options than, say, OneNote. I’m confident that if I can export my data if I decide that I no longer want to use Evernote and, odd as it may sound, that’s a good reason to use it. I can use Evernote with the confidence that my data is safe.

There’s even an API and in theory it could be used to automatically create a synchronised copy of the notes in a different format. That’s something I intend to explore. I’m hoping someone’s already done something along those lines, but if not it would make a nice little project. 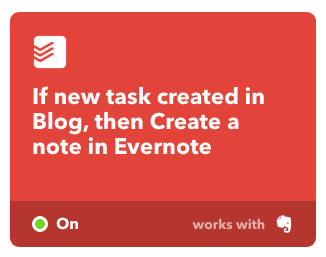 The API also makes it easy for third parties to offer Evernote integration in their products. There are a huge range of applications that work with Evernote, making it a platform for storing information.

For example, I use Todoist and use it to keep track of ideas for blog posts. Each idea is a to-do item in a specific project within Todoist. When I think of a new idea I add the to-do item and then an IFTTT automation creates a new, blank note with the same title in the appropriate Evernote notebook.

The second major reason for going back to Evernote is the web clipper. OneNote does have a web clipper but it’s just not in the same league. Evernote’s options to clip the article or simplified article as well as the entire page make it really easy to grab just the relevant information. 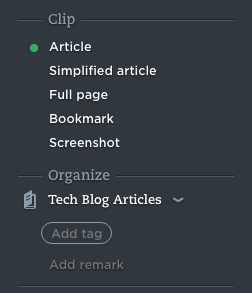 Web clipping is a key part of my blog workflow. I draft the blog posts in one notebook and then clip the finished article into another so I have a handy searchable copy that includes the images and any last minute corrections from my final proofreading.

Finally, and perhaps most importantly, I just get on well with Evernote in a way that I didn’t with the alternatives. I experimented with documents in a folder structure but found that I much preferred a dedicated app to keep all my notes in one place.

OneNote was fine for longer writing in the desktop software but the mobile application was slow, clunky and prone to synchronisation issues. Google Keep is fine for quick notes, and I still use it for short post-it style notes, but no use for longer writing. Evernote hits a sweet spot that is good for both.

In the end it’s not just the feature set. It boils down to the simple fact that I find Evernote comfortable to use. For that, it’s worth the money to me. My decision to ditch Evernote was wrong and I’m back in the fold.