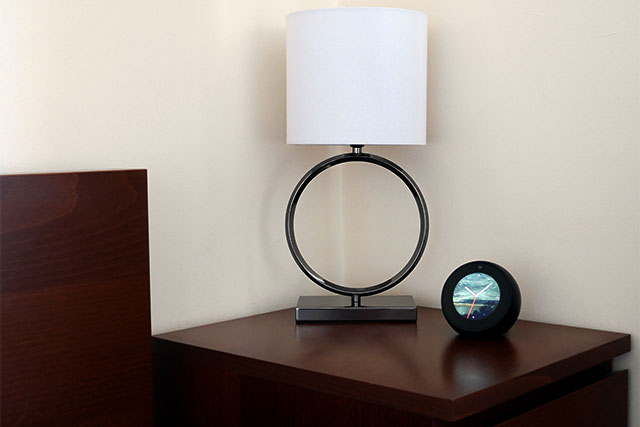 My alarm clock has been a faithful servant for many years, but maybe it’s time to retire it.

It’s about 30 years old. Can you imagine still using any current electronic device in 30 years? It was not even a premium device – it’s a Saisho, a Dixon’s own brand label from the 80s designed to put you in mind of big Japanese brands like Sanyo.

I’m actually having some sentimental pangs about replacing it. It seems a shame not to keep it going, but it is starting to look a little the worse for wear and I’m a sucker for technology.

My bedside table has also been home to an Echo Dot for a while now, and as soon as I saw the Spot I thought it would be ideal to replace both and allow me to re-home the Dot in another room. The design speaks for itself – it’s a neat little bedside clock.

After the initial setup, the first thing I wanted to do was select a clock face theme. That’s where I found the first problem, and it’s not really a problem with the device. I’m very short sighted. When I’m in bed I could just about read my old bedside clock without my glasses on. I really struggled to find a Spot clock face that I could read.

The high contrast digital display looked like it would do the job – the digits aren’t that much smaller than my old clock:

It does work, until night mode kicks in. Night mode is pretty much essential – I wouldn’t want a really bright display all night. Unfortunately it dims the display so much that I can’t read it easily. 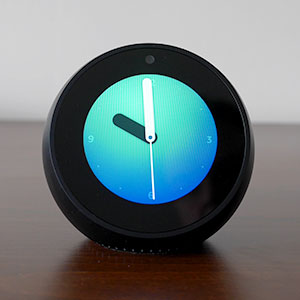 I didn’t really want a digital display though. The design lends itself to an analog clock face. The clearest are the bold designs – currently available with a teal or fuchsia backdrop.

They work OK – the hands are very bold – but they’re not really designs I’d want during the day. I had to settle for those, though, because they’re the only ones that I can see without my glasses on.

I’m hoping that more clock face themes will become available, but it would be better to go beyond that to be able to control the font size or clock hand thickness independently of the background to get it exactly the way I want it. It would certainly be possible to have a digital clock in a bigger font, especially if it was split over two rows for the hours and minutes.

There is some inconsistency in the way themes handle night mode. Some turn red, some don’t. It’s also worth noting that in night mode the screen isn’t completely dark apart from the hands or numbers – you’ll still see a faint glow from the rest of the screen. I assume this is because it’s an LCD screen. An OLED screen would be much better, as the blacks would be truly black and the increased contrast would make it easier to read.

The screen issues would probably go away entirely if the screen was just a little bit bigger. The bezel is bigger than it needs to be, and it would surely have been possible to put a slightly bigger screen in the same overall footprint.

My poor eyesight means that the other features of the screen are largely lost on me. The flash briefing for news is available in video form, but I can barely see it without my glasses. The same applies to the weather information. By the time I’ve got up and put my glasses on I might as well use my phone or a tablet to catch up on the news.

When watching video you have a choice between a small rectangle in the middle of the screen or the zoomed view that fills the circular screen. Full screen looks best although you obviously lose a lot of the picture.

So that’s the screen, the next question is how does it sound? Obviously you wouldn’t expect great sound from such a small device. I’ve seen it compared to old clock radio alarms of the sort that I used to have, but that’s unfair. The Dot is the one that has that tinny sound when playing music – the Spot is a clear step up but don’t expect the kind of sound you get from the full size Echo.

It sounds great with spoken content such as audio books and podcasts, and is adequate for occasional music listening. I’d still pair it up with a Bluetooth speaker for extended listening, but for waking up to music it’s fine.

The other feature is the camera, and that’s a little controversial. Some people are uncomfortable with a cloud connected camera on their bedside table. It’s not something that really worries me. The chances of someone managing to hack into it are remote and if they manage to see anything at all they’d probably suffer more harm than me – they’d definitely need the brain bleach…

Since I bought the Spot I’ve been switching between it and my old alarm clock, trying to decide whether it will be the permanent replacement. That’s only because of my poor eyesight though, and if I had better eyes I’d certainly get more out of it. I’d recommend the Spot if you want an Alexa enabled bedside clock – but only if you have good enough eyesight.