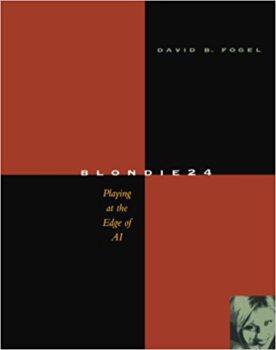 I’ve just finished a re-read of Blondie 24 by David B. Fogel and subtitled “Playing at the edge of AI”. Published in 2001, it details his work with Kumar Chellapilla to create a program that could teach itself to play checkers (draughts). Along the way it provides interesting insights into the history of artificial intelligence.

Much has changed in that field since 2001, but it still serves as a useful primer on neural networks and machine learning.

The book came out not long after IBM’s Deep Blue chess program had beaten Kasparov, and the best checkers program of the time, Chinook, was already arguably capable of beating any human opponent. So why did Fogel choose to revist checkers?

His argument is that neither program can really be considered AI. Both rely on taking existing human expertise and attempting to codify it into algorithms. These were coupled with a database of openings and endgames, allowing the computer to get off to a good start and to play a flawless game once it had reached a position that was in the database. Coupled with the computer’s ability to assess millions of positions every second, it was a brute force approach.

A grand master playing a near perfect game could still have a chance, but the computer was never going to tire or make silly mistakes. It played a good game, but it was just an advanced calculator – it wasn’t AI.

Fogel’s approach was to design a program that knew as little as possible about the game and have it learn to play by using an evolutionary algorithm that aimed to mimic natural evolution. Multiple generations of the program, each with random variations and survival of the fittest, eventually resulted in a program that could hold its own against strong players.

It never got to a level where it could compete with the very best, but that wasn’t the point. For the time it was a major achievement. The evolutionary algorithm was running on a 400MHz Pentium II and took months to run through a few hundred generations.

So why bother when the brute force approach was already so successful? The answer is that programs like Deep Blue can only be better at playing games – or more generally, solving problems – that we already understand. The machine learning technique can be applied to problems we don’t fully understand.

Despite its age, Blondie 24 remains a relevant read. If you’re not a checkers enthusiast – and I’m not – you’ll probably find yourself skipping over some of the detailed analysis of individual games, but you don’t need to be an expert to enjoy the book.

For a more recent overview of machine learning, it’s worth watching a lecture by the founder of Google’s Deep Mind, Demis Hassabis, where he talks about the current and future capabilities of AI.