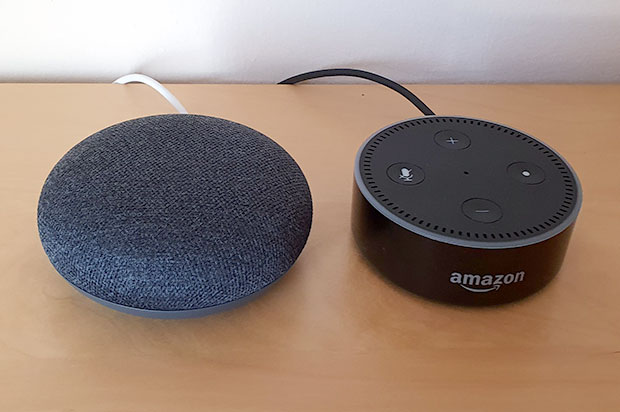 Ah, that’s what I was expecting – Slade, The Pogues, Mariah Carey and all the usual suspects.

To be fair to Google, it does a better job when you ask for a specific song. Alexa has a tendency to pick cover versions, live versions, remixes – anything but the original.

I’ve been playing with Google as an alternative to Alexa at home. I’ve long been torn between Google and Amazon for music streaming. Amazon Music Unlimited is cheaper, if you’re already a Prime customer, but I prefer the Google Play Music app – although I’m aware its going to be replaced by YouTube music at some point.

One of the reasons for considering the switch is that I wanted a single voice assistant for both home and phone. I’ve decided that 2020 will be the year I start talking to my phone, and Google has the potential to be the voice assistant that I use for everything. It’s certainly better at answering web queries. Here’s a random example:

“Alexa, who won Wimbledon this year?”

“Here’s a page from wikipedia about the 2013 Wimbledon championships….”

“The winners of the 2019 Wimbledon championships were…”

That said, I’m much more likely to just pick up the phone when I want to search for something.

Both occasionally fail with smart home control, getting confused when there’s more than one light in a room. In my lounge, I have a “lounge light” and a “lounge lamp”. Alexa used to distinguish between them perfectly, but recently has taken “turn the lounge light on” to refer only to the lamp. I now have to say “turn the lounge on”, omitting the word “light”. I have no idea what happened to cause this change in behaviour.

Alexa has some other downsides. Like many people, I’ve had it occasionally pipe up seemingly apropos of nothing. The weirdest example was when it said “The dark is an entity”. Completely out of nowhere.

Going back through the history, it appears that it thought someone had said “Alexa, what is the dark?” although I couldn’t figure out why it thought that from the voice clip. It was certainly creepy in the middle of a quiet conversation in which the wake word was definitely not invoked.

And then there’s Bixby. Since I use a Samsung phone, why not try Bixby on the phone and stick with Alexa or Google at home?

I gave up on Bixby when I first tried using it to set a reminder and it failed to understand “tomorrow at midday”, instead creating a reminder that “tomorrow may die”. Thanks, Bixby, that’s cheerful.

Its speech recognition was vastly inferior to its competitors. Even when it did parse the words correctly, it wouldn’t separate the times – I’d get reminders with subjects such as “Buy milk tomorrow at 6pm” with no notification set, instead of just “Buy milk” with a reminder set to notify at 6pm.

Bixby has improved since then, but, rather annoyingly, Samsung has entered into a deal with Spotify. If you want Bixby to play music on request, it has to be through Spotify. So that’s Bixby out of the running – I just can’t switch to Spotify.

Google seems to have the edge, then, as the one assistant to rule them all, but for two seemingly insignificant factors that might tip the balance in Alexa’s favour. Firstly, try as I might, I just can’t warm to saying “OK Google”. The name makes all the difference. Secondly, I prefer the sound of Alexa’s voice.

Strange as it might seem, those two little things could combine to keep me in the Alexa camp and even switch to it on my phone. When there’s very little to choose, it’s the smallest things that make the difference.