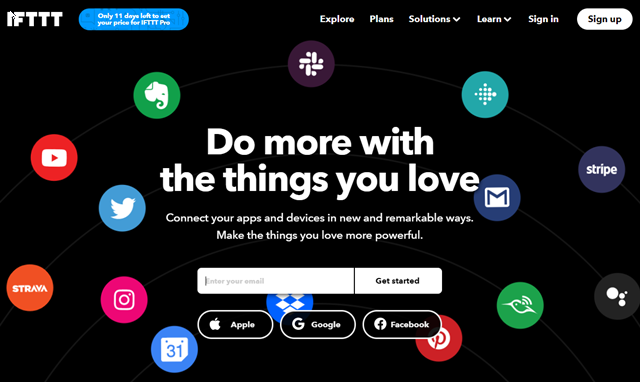 IFTTT – If This Then That – has angered users by switching to a subscription model, but they’re not the first to go down that route and I’m sure they won’t be the last.

IFTTT is a service that allows you to integrate web services and apps with simple automations – as the name suggests, you pick a trigger (“If this…”) and an action (“… then that”). It is, in effect, a personal and vastly simplified Enterprise Service Bus (ESB). Examples of integrations – known as applets in the IFTTT world – include options to post new photos to multiple social media feeds, add new commands to voice assistants and trigger smart lighting based on events in other apps.

IFTTT allowed you to create as many applets as you wanted, but the free tier now restricts you to just three. To use more than three applets you have to sign up for the Pro tier. The pricing is unusual in that, to start with, you can set your own price between $1.99 and $9.99, and that price will be honoured indefinitely. Once that introductory offer ends, I’d imagine that the price will be $9.99, so if you’re determined to continue with IFTTT then it’s worth signing up at a lower price while you still can.

The move has angered users, but I think it was inevitable and they’re not the first to switch to a paid model. Smart home vendor Wink did the same thing in May, at very short notice. The reason that formerly free services are now charging is obviously money, but it’s not just about profit. These services cost money to run. Keeping them up, running and – most importantly – secure from all of the latest threats is a massive undertaking and requires infrastructure and staff. The surprise is not that they are now charging, it’s that they were ever free in the first place.

Free is a relative term, and there is the argument that if you’re not paying for a service then you’re the product. Facebook is free to use because you’re part of the product – Facebook is selling you to advertisers. The same applies to Google, and probably explains why Google is so fast to drop useful services – they’re the ones that aren’t bringing in that all important advertising revenue. I believe IFTTT’s model was similar – they charged third parties to integrate with IFTTT so that those companies could advertise IFTTT compatibility and also gain insights into how consumers were using their products.

The situation is a little different with hardware, where a physical product is sold and the service is free. That’s the model that Wink used and that Philips Hue and others still use. Their revenue comes from sales of the hardware and the service is free to use. That only works as long as there are continued hardware sales to subsidise the existing users. When the smart bulb market is fully saturated, Philips will find it harder to sell new lightbulbs but still be stuck with the cost of running the services. Will they then be tempted to move to a subscription model? That would really create an uproar and be very bad PR – lots of people have sunk a lot of money into Hue lighting.

At least Philips Hue can still be controlled via a local API and, as long as you’re on the same network as your hub, you don’t need the cloud service. You don’t even need to use the Hue hub – the bulbs can be used with other hubs, such as the Amazon Echo Plus. Other smart home devices are less flexible, and do rely completely on the vendor’s services.

I think most of the anger directed towards IFTTT is a result of what looks like bait and switch – the sudden change from free to paid. I actually don’t have a problem with them charging for their service – how else can they keep it running? You could argue that they must have known the free service wasn’t sustainable and that therefore offering it was a cynical move to get people reliant on the service before charging, but I’m not sure that is the case. IFTTT has been around for 9 years, so if that was their plan all along they were playing a very long game. No, I think they believed that their service was sustainable but found that revenue from third parties wasn’t keeping up with costs. The difficult economic climate hasn’t helped, but that probably just brought forward the inevitable.

The answer is going to be the subscription model for most users. I think an important lesson for vendors is to build that in from the start so the they don’t anger users by switching later. If a product or service has both a free tier and a premium tier from day one, at least consumers know what they’re getting into. The other option is to start off by offering a simple service for free and then add premium features at a price, rather than take away previously free features. Taking away previously free features is what really annoys people. That’s a mistake Evernote made a few years ago. While they always had a premium tier, they made the mistake of removing features from the free tier. Dropbox recently did the same thing when they restricted the number of devices that could connect to a free account.

For the more technically inclined there is another answer – do it yourself. Many of IFTTT’s smart home and phone capabilities can be replicated with tools such as Home Assistant. Home Assistant is free because it’s created by enthusiasts and because there is no infrastructure cost. In fact, Home Assistant has taken a good approach to adding a paid tier through Home Assistant Cloud provided by Nabu Casa.

The cloud service is separate to the free software and entirely optional. There is nothing in the cloud subscription that you can’t do for yourself for free, but it adds a layer of convenience and security for users who don’t have the time, skills or inclination to manage things like remote access and voice assistant integration. It’s also a good way to support the developers, but the development team are fully committed to keeping Home Assistant open source and free to use.

Ultimately, while I think that IFTTT could have handled the transition to paid subscriptions better, I don’t blame them for the move. We’ve grown used to free services on the internet, but they’re rarely sustainable. As the market matures, there does come a point where you have to accept that you get what you pay for.

That’s the If This Then That to take away from this move – if a service has value to you, then be prepared to pay for it.