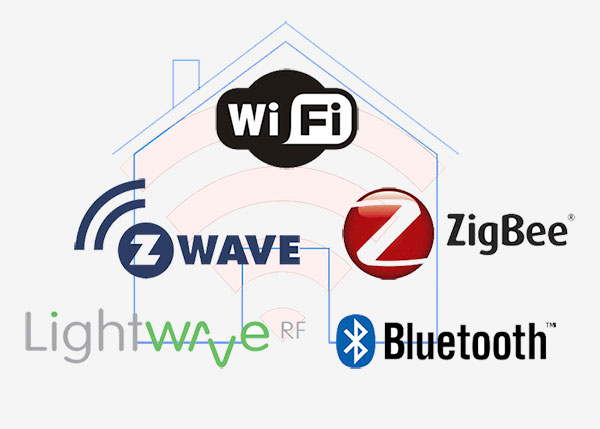 So exactly how do devices such as sensors and light bulbs talk to your home hub? Since I sometimes get asked about this stuff, today I’m going to run through some of the basic ways in which these devices communicate.

I didn’t really give much thought as to how the sensors and bulbs communicated with the hub. It fell into the general category of “things that talk wirelessly but don’t use wifi or bluetooth”. It was only when I started looking into compatible things to add that I gave it much thought.

There are two main protocols – Zwave and Zigbee.

Here in the UK both operate on the 868MHz frequency band rather than the 2.4GHz or 5GHz used by wifi. The lower frequency means lower power consumption, making them suitable for battery operated devices. In addition, they form a mesh network – any devices with permanent power, such as switches and bulbs act as repeaters to further strengthen and extend the network.

Devices purchased with a hub in a starter kit are usually already paired, but when adding additional devices you have to follow a pairing process that varies according to the device type. In the case of SmartThings that means using the app to scan for new devices and then following the instructions for the specific device to put it into pairing mode.

For the SmartThings motion sensor, for example, this involves holding down a button while inserting the battery, a procedure that seems to require at least three hand. For the Wemo bulbs it involved toggling them on and off a specific number of times in quick – but not too quick – succession. Pairing can be a fiddly process…

The advantage of pairing is best illustrated by comparing it with an older protocol used for remote control of devices using the 433MHz band. One common use for this is in wireless doorbells – they consist of a push button on the door that when pressed sends a signal to a receiver over the 433Mhz band which then rings. The trouble is that the receiver will sound whenever it receives the signal, regardless of where it’s come from. If your neighbour happens to have the same brand of doorbell and is within range then your doorbell might ring when someone calls on them and vice versa.

To mitigate this the bell button and receiver often have a number of different channels that can be set, which change the signal being sent. There’s usually only a limited number of options, though, and it would still be possible for someone to ring your doorbell simply by trying each one in turn. Fortunately most 433Mhz devices are low powered and the range is pretty limited.

There is an entirely 433MHz based system for home control – LightwaveRF. This uses a pairing process that should prevent unintentional triggering even if your neighbours also use the same system, but it’s not exactly secure. While ZWave and Zigbee are not invulnerable to a determined hacker, they should prove considerably less open to abuse.

Regardless of protocol, devices will need to talk to some kind of hub. The hub is then connected to your home network either via wifi or directly with an ethernet cable. You can then use an app or web front end to control the devices, either via the hub directly or via a cloud service that the hub connects to.

There are a number of different options for the hub and they’re often sold as starter kits with a few devices. Some of the smart thermostat systems such as Nest and Hive can also act as hubs, but usually only for a limited range of devices. Most general purpose hubs are designed to work with ZWave. Zigbee is more commonly used for specific systems, such as Hue, and the SmartThings hub is one of the few capable of communicating directly with Zigbee devices.

This means that SmartThings relies on both your internet connection and Samsung’s service being available, which is its major drawback.

The Philips Hue hub works a bit differently – the app will talk to the hub directly over your local network. You can use the Hue system without setting up an account with Philips and without any reliance on the internet. You only need the cloud element if you want to control your lights when you’re not on your home network.

To complete the picture, some hubs can also talk to network connected devices such as media players. It’s also possible to get hubs that work with bluetooth or even act as infrared remote controls.

Once you have a hub talking to devices you can then get into the world of automation. SmartThings is fairly capable in that regard, and it’s still a system I’d recommend to beginners for everything except lights, where Hue is more flexible. You can also integrate Hue into SmartThings, allowing SmartThings to talk to the Hue hub to automate your lights, and that’s a great way to integrate your lighting into automations.

I’ve largely moved over to HomeAssistant, as that frees me up from reliance on proprietary cloud services, and it’s the system I’d recommend if you’re comfortable with Linux and want a DIY approach. I mentioned in my review that I’d bought a ZWave USB controller, and that allows me to use HomeAssistant directly as a hub for ZWave devices. I’ll cover that in more detail in a future post.

Getting started with home automation