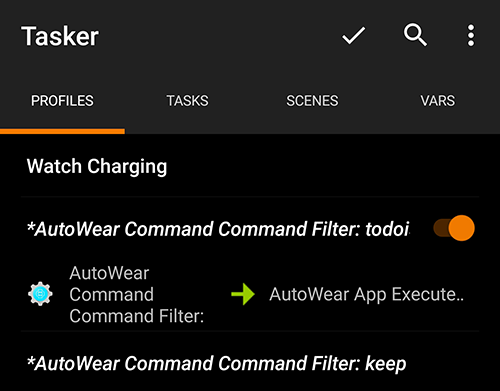 In my last post I started looking at automations on WearOS using the AutoWear plugin for Tasker. This time I’m looking at how to trigger those automations from the watch.

The easiest way to show it is through an example, so I’m going to replicate the quick launch widget that was available on the Tizen watches.

First of all, you need a way to launch the automation. I’m going to assign the AutoWear app to the double press on the home button. On non-Samsung WearOS watches, the app can be assigned to a single press of either button. 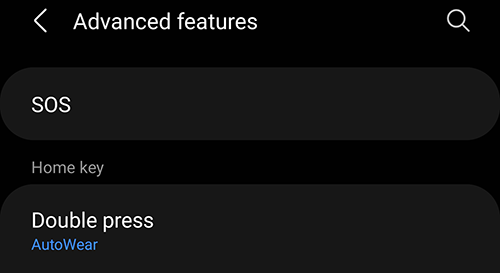 Opening the app, either from the app list or the double press, sends a command to Tasker on your phone. The AutoWear app sends the command “&APPOPENED&” – you’ll use this later in the profile that you create in Tasker.

For the quick launch, you’ll need the command to open a screen on your watch. Screens are custom user interfaces that can be created using the AutoWear app. I’ll be using the button screen, but there are a number of other screen types.

Start off by opening the AutoWear app on your phone and add a screen. Pick the button screen type and give it a name. Next you need to set the command that will show the screen – this is the “&APPOPENED&” command that is sent when the app is launched.

The next step is to pick your images – since this will be a quick launcher, you can use the relevant app icons. This will create a comma separate list of icons in the images field. Each image then needs a command associated with it. This will also be a comma separated list, and you’ll need to make sure it’s in the same order as the images. The command names aren’t important – the real work is done in Tasker profiles that react to those command names.

You can also set the number of images in a column and the image size – I found that three or four per column, with an image size of 80 or 100, worked best.

It would be easier if these weren’t separate lists and you could pick an image and then set the properties, such as the command names, associated with that image. As it is, you have to be careful to keep the commands in the same order as the icons in their respective comma separated lists. That can get fiddly when you have a few of them and you want to mess around with the order.

For each command, you then create a profile in the main Tasker app. Pick “Event” as the profile type, then select the AutoWear plugin and enter the command name in the Command Filter.

Finally, add an action. Select the AutoWear plugin, then “App” and in the configuration scroll down to “Launch App”. You can then enter the name of the app to launch on your watch. Repeat for the apps that you want on the launcher. You may need to use the app package name for some apps if the name itself doesn’t work – the package name can be seen in the icon selection screen if you use app icons. It’s worth noting that it doesn’t work for all apps – frustratingly Google Pay is one that doesn’t work. 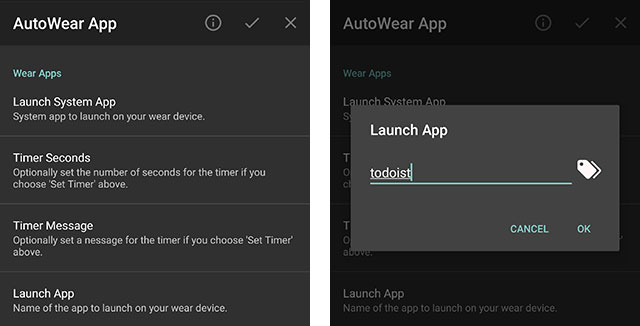 To summarise, you’ll end up with a screen that is called by the %APPACTION% command, consisting of buttons that send a command to Tasker. The Tasker profile then launches the corresponding app on your watch via the plugin. 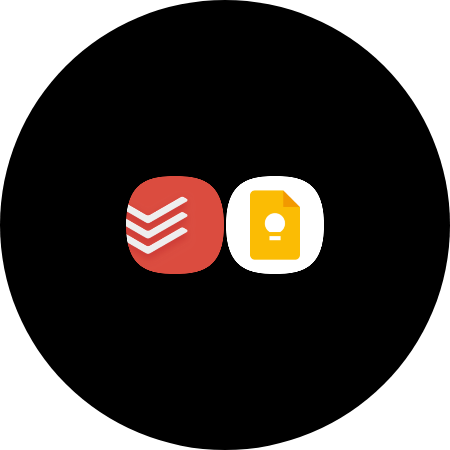 So why am I setting up a separate profile for each command? It’s possible to use parameterised commands for AutoWear. I could send a command such as “launch=:=todoist”. I could then set my profile to respond to the command “launch=:=”. The parameter – i.e. todoist – would be available to my task in the variable “%awcomm”. I could then use that variable to launch the app.

Aside from simplicity, the answer is that I might want some of the buttons to do things other than launch apps. My quick launcher screen is going to be the entry point to all of my watch driven automations. A command could trigger the display of another screen, allowing me to build up a sequence of screens, or it could perform a sequence of actions.

For example, you can use the screens in combination with the Tasker plugin for Home Assistant to create a simple user interface on the watch to control your home devices. I’ll cover that in my next post.