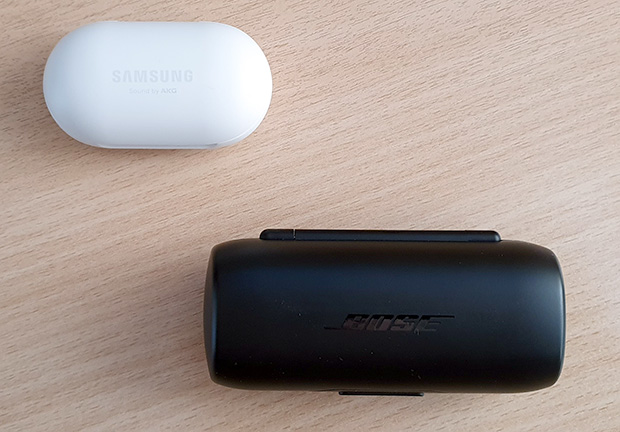 Not exactly the Samsung software challenge, but hardware this time. I’m reviewing the Galaxy Buds that came as a freebie with my S10+ pre-order.

I’ve tried a number of bluetooth headphones and earbuds. I used Google’s pixel buds for a while but had trouble with the fit – they simply wouldn’t reliably stay in my ears. I also found the cord linking the buds annoying, especially with collared shirts.

I wanted truly wireless earbuds that would reliably and comfortably stay in place and finally settled on the Bose Soundsport Free. They’re comfortable and I have no fears about them falling out, so they’re the benchmark against which I’ll be judging the Galaxy Buds. 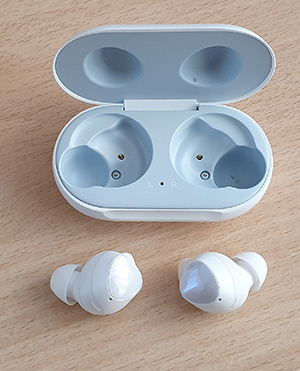 The Bose are earbuds that sit in the outer ear, which is a design I generally prefer as I find in-ear earphones that go into the ear canal can feel intrusive and uncomfortable. The wing tips hold them securely in place, and, despite their size they don’t feel too heavy.

It took me a while to get used to the Galaxy Buds, but despite the in-ear design they’re also surprisingly comfortable. I think my prejudice against in-ear models was based on the free wired earphones I’ve used. The combination of the support given by the shaped wing tips and the lack of a cord to weigh them down and get snagged on things helps, although they’re slightly less comfortable to wear for longer periods.

I’ll call this one a draw. I tend to wear earbuds for relatively short periods anyway, and there’s not much to choose between them over an hour or two.

There is one other small comfort – or at least convenience – win for the Galaxy Buds. The charging case is much smaller and lighter, so it’s a lot easier to find room for it in your pockets.

I often listen to audio books and podcasts when I’m out walking. With music, missing a few seconds because of some noisy traffic isn’t really a problem, but it can be critical when you’re listening to a book. Did the butler do it? I don’t know, a motorbike went past and I missed that bit…

The in-ear design of the Galaxy Buds makes them a clear winner. They block more ambient noise, which means that I don’t have to crank the volume up so far to compete with traffic noise when I’m out. Although they have an ambient sound mode, I haven’t found them to be so isolating as to be dangerous. 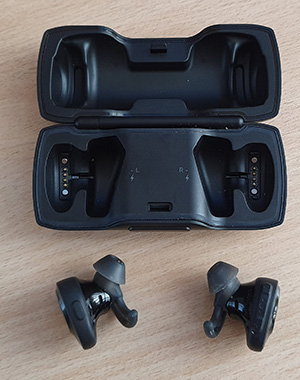 This is where the Bose come into their own. They offer a much richer sound. Although the Samsung Buds have a variety of sound profiles, there’s something a little sterile about the sound that can’t match the warmth of the Bose. Using the bass boost profile on the Galaxy Buds helps with some types of music, but somehow it feels like the bass tones are then disconnected from the mids and highs – the sound just doesn’t quite feel integrated.

It’s hard to explain, and I’m no audiophile, but for music the Bose are clear winners.

That said, the almost clinical clarity of the Galaxy Buds in the mid and high end gives them the edge for spoken word content and they’re still better than most bundled earphones – including the supposedly AKG tuned earphones that come with the Samsung phones.

The Galaxy Buds have been criticised for poor connectivity and drop-outs, but I haven’t experienced any problems. Both seem equally reliable.

The Galaxy Buds are touch controlled, which is easier than the slightly fiddly buttons on the Bose, although touch controls on in-ear earphones can be uncomfortable – you need a light touch to avoid the feeling that you’re jamming them further into your ears.

The control options on the Buds are more extensive, as you can choose to tap to toggle ambient sound or talk to Bixby. Unfortunately that’s at the expense of using them to control volume, which is an odd choice. You can’t use the advanced features if you want volume control via the touch controls on the Buds, which leaves them on a par with the Bose for functionality.

It’s also worth noting that, although they work with iOS, the advanced functions of the Buds are only available on Android via the Samsung Wear app.

Ultimately it’s almost impossible to recommend any truly wireless earbuds, as the most important factor is how comfortable they are and how well they fit. No matter how good they sound, you won’t want to use them if you’re constantly worrying about them falling out of your ears. You really need to live with them for a while to find out.

That said, if you got the Buds as part of the pre-order promotion – and you’re happy with the fit – there’s no need to look elsewhere. If you’re not a Samsung owner, or sound quality is a priority, the Bose are a better option for only a small premium over the Buds.