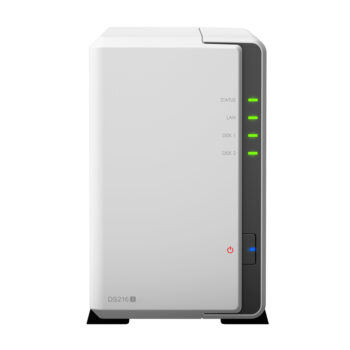 The obvious question is why, given that I run a small PC as a home server, did I get a NAS device? I could easily store files on the server and use it as a NAS in addition to its other duties.

The driver behind it was my main video camera. I’d been using Zoneminder as the software to run it, which is great for motion detection but not so good if you want 24×7 recording. My research into other options led me to Surveillance Station, an app that can run on Synology devices. I already had hard drives I could use from old USB 2.0 external drives, so I didn’t need to buy a populated device.

I bought the DS216J, a model with two drive bays that’s one step up from the lowest spec models that Synology sell. My intention was to run it purely as a PVR for the camera.

Setup was dead easy. The hardest bit was getting the drives out of their old enclosures. The disks in the DS216J aren’t hot swappable but it’s easy enough to install them. Booting up for the first time configured the disks as a mirrored pair for resilience.

The web interface is Synology’s DSM desktop, from which you can configure the device and access the package manager to install other applications.

I got Surveillance Station running without too much trouble. It’s OK. It does the job. I’ll write a full review to go into the pros and cons in a future post. 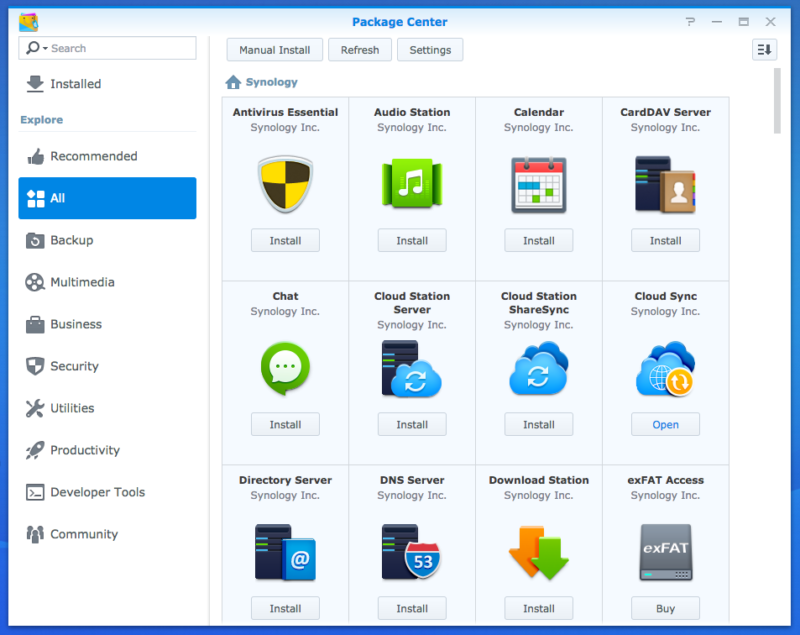 I then started exploring the wealth of other software available. It’s impressive. The thing to remember is a Synology device is not just about network storage – it’s a small server. It’s basically running a version of Linux with Synology’s web GUI on top. That GUI makes it easy to set up your Synology to run a vast number of applications. There are the things you’d expect in a consumer NAS device – file servers, media servers and so on. There are also web servers – plural, as you can choose between Apache and Nginx – a mail server, DNS server, DHCP and many more.

It even has a web based office suite. Higher end models feature hot swappable disks and the ability to run virtual machines and Docker images. It really could be a one stop shop for a small business that didn’t want to rely too heavily on the cloud.

Coming back to home use, there are a bunch of other useful features. Dynamic DNS can be configured through the front end, using a range of DDNS services including Synology’s own. LetsEncrypt is supported, making it easy to configure secure access from outside of your own network.

There is also a VPN option if you want to use your own network as a VPN service. A VPN is recommended if you’re out and about on WiFi you don’t trust, but using a commercial VPN service just moves that trust issue – how do you trust the VPN provider? With a Synology at home accessible over the internet you create your own VPN – so you’re connecting securely back to your own network and using that connection for your internet access.

It can even run Home Assistant. The simplest way requires one of the more expensive models that can run Docker, but it’s also possible to install it directly. I haven’t looked at that yet – so far I’m keeping it separate, but I’m tempted to give it a go.

They’re all things I’ve either done already or could do on my home server. Synology just packages it all up in a way that makes it simple and doesn’t require intimate knowledge of Linux system administration.

Even though I actually enjoy figuring out the details most of the time, sometimes it’s nice to set up something that just works out of the box and save my time for more interesting projects. Researching how to configure, say, OpenVPN would be rather time consuming, whereas on the Synology I had it up and running with a few clicks and minimal research.

Another good example is CloudSync, a service that connects to a range of cloud storage providers, including Dropbox, OneDrive and Google Drive. I’d managed to get Dropbox sync running on my Linux server, but it was a bit flaky. I really wanted to use OneDrive, as I have 1TB of storage as part of an O365 subscription and wanted to make better use of it. It was nice to be able to set that up in a couple of clicks on the Synology, and I now have an rsync script copying files from my Linux server to the Synology from where they automatically get synced up to OneDrive.

What I thought was going to be a single purpose device dedicated to recording my security cameras has already proved itself in other areas and I’d definitely recommend Synology for anyone wanting a flexible home server. It’s a neat little device, conveniently packaged.