The simple approach is to use the wget command to grab the image and save it to a file.

You could go direct to the camera, but to do that you’d need to set up a separate script for each camera. The script would have to include the URL of the camera and any authentication needed. That seems like an unnecessary duplication of effort if you already have the camera set up in Home Assistant.

Note that you can’t simply hardcode the URL into a script because the token parameter in the URL will change. You need to grab the attribute value when you want the picture.

First set up a shell command component in your main configuration.yaml file that takes two arguments – a filename and a URL – and grabs the URL into the file:

You can now call that command as an action in your automation:

Update: As of v0.57 the camera component has a snapshot service – I’ve left the shell command method in this post, as it’s useful as an example of using commands, but you can read the update here.

Now you have a snapshot image that you can use for notifications and the great thing is that it works for any camera that you can view in Home Assistant – you just need to change the entity id that you use to grab the picture attribute.

What if you want to show the snapshot in the front end? Home Assistant has a persistent_notification component that can show messages in the front end until you dismiss them, but unfortunately it doesn’t have an option to add an image to the notification.

There is a workaround using group visibility.

First of all, define a camera using the local_file platform to point to your snapshot image.

Put this in a group:

You’ll want to put the group definition at the top of your group.yaml file as groups are displayed in the order that they’re defined in the file. Create an automation to run on startup to hide the group – there doesn’t seem to be a way default groups to hidden:

When the event occurs, you need to set up an automation to do three things. First grab the snapshot as above, then create a persistent notification and finally show your hidden group. For example, I’ve extended my doorbell notification:

You should then get a notification and see your snapshot when the doorbell rings: 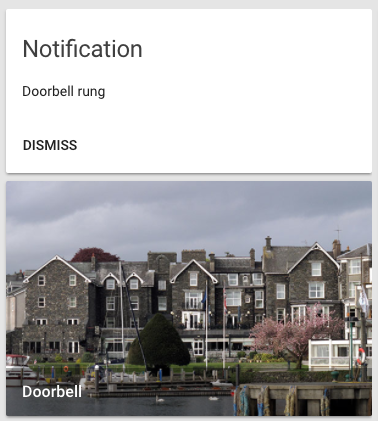 You can then trigger an automation based on the state of that entity:

Update: As of v0.57, the notification text is an attribute and the state will read “notifying”

If you’re not using a default view you may need to put the snapshot camera in another group on a separate tab, otherwise when you hide the group the camera will appear anyway – according to the docs: “If a sensor belongs to only one group and that group is hidden, the sensor will “jump” to the top of the web interface. Add the sensor to an additional (visible) group if you do not want this to happen”.

This is just one approach. For another approach, using a Pi camera and MQTT, see Robin Cole’s excellent write up at hackster.io.