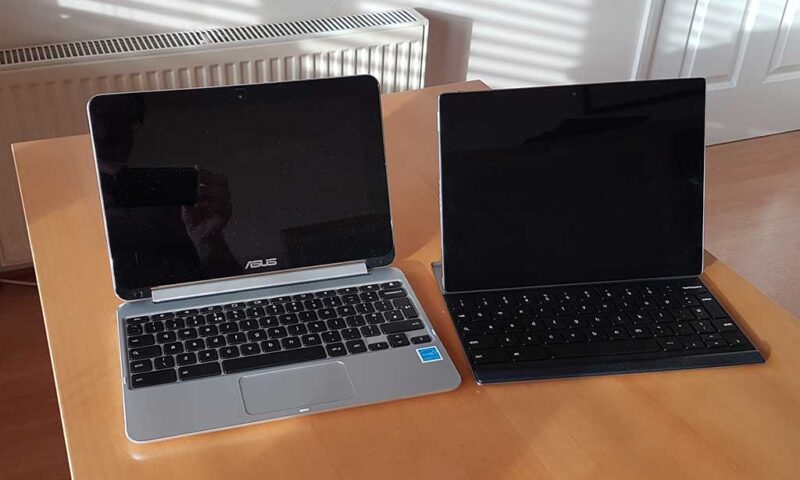 I haven’t had time for any technical projects lately, hence the relative silence on the blog, but I have been playing with a couple of gadgets to keep me productive when I’m out and about.

I’m not really a laptop guy – for real work I prefer a big screen and a proper keyboard – so I wasn’t looking for something to use for programming. I’d probably only be using it for a bit of web browsing, email, researching and writing blog drafts and maybe some media consumption. A tablet with attachable keyboard sounded like just the thing.

I started by ruling out the Microsoft Surface line. The larger Surface machines would be overkill and while the Surface 3 ticked almost all of the boxes I just felt that a lighter OS would be a better fit.

I also ruled out the iPad pro as being too expensive (£700 for the 32GB version with keyboard).

Both the iPad and the Surface are also best used on a solid surface, as the keyboard attachments don’t form a rigid hinge, making them awkward to use on a lap.

That left the Google Pixel C, an Android tablet with a magnetically attachable keyboard, and the Asus Flip, a Chromebook with a touchscreen and 360 degree hinge to turn it into a sort of tablet. The Flip is also one of the first Chromebooks capable of running Android apps.

I couldn’t decide. So I got both, and figured I’d sell the one I didn’t like. It doesn’t seem like a fair contest on paper – a £520 tablet (including keyboard) vs a £200 Chromebook.

I was expecting the Pixel to be a clear winner, and in many ways it is better. The screen is better – bigger, higher resolution and an arguably better aspect ratio for productivity use. It has a faster processor and more storage. It’s also a sleaker design than the Flip, which is basically a small laptop, and the build quality is better.

The Flip isn’t great in tablet mode. It just feels weird with the keyboard flipped to the back and too bulky. It’s a laptop first, tablet second. The Pixel is the opposite.

While the Flip can run Android apps, they’re slow to launch and Android on ChromeOS is still a little buggy. Clearly, as a dedicated Android device, the Pixel is in a different league.

The weird thing is, though, I think I prefer the Flip. The keyboard is much better to type on than the Pixel’s and using a trackpad in laptop mode is more comfortable than continually reaching up to touch the screen. Cheap is also a plus – I’d rather throw it in a backpack and take it out and about than risk a more expensive device. It’s also slightly lighter than the Pixel and keyboard combination, which helps with portability.

For browsing and media consumption the Pixel is a great tablet. I just can’t get on with the keyboard.

And the really interesting thing about the Flip is that it’s possible to run Linux on it… it’s a rainy day here, looks like a little project!

seanb4 years ago0 commentsReview
in Mobile