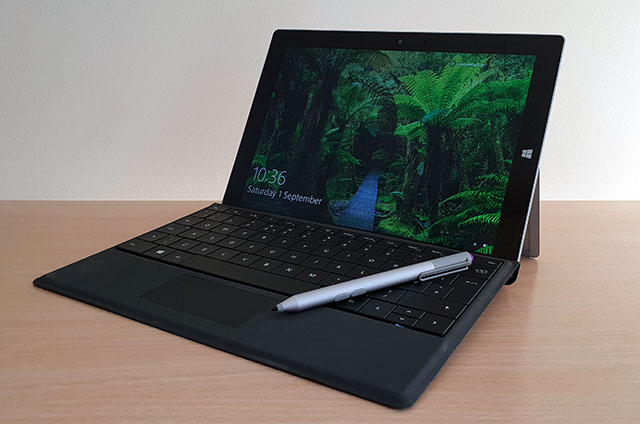 About three years ago I bought a Microsoft Surface 3. Despite its lack of power it wasn’t a bad little device, and so when the Surface Go was announced I thought I’d take a look and see if it was worth upgrading.

My Surface 3 lapsed into disuse about a year ago. It had developed a fault – touching the screen caused the screen to turn off. It worked fine with the keyboard, but the point of a device like the Surface is to be able to use it as a tablet as well as a laptop. In laptop mode it really needs a firm surface – whenever I tried to use it on my lap I found the kickstand dug into my knees and the lack of a rigid hinge made it feel unstable. Without the tablet option it’s less use than a proper laptop.

After exhausting various possible solutions I’d found in forums I’d reached the conclusion that it was a hardware problem and so it started to gather dust.

I decided to boot it up again to remind myself what it was like. You can imagine how long it took to process a year’s worth of updates…

When it was finally up to date I was pleasantly surprised to discover that the screen problem was fixed. Presumably it was resolved by a driver update in the time since I’d last used it. That gave me a proper chance to reassess it. It still holds up pretty well.

The 128GB hard drive is eMMC storage and so very slow, but once programs are up and running they’re quite usable. Similarly, Windows 10 is perfectly usable with 4GB of RAM as long as you don’t expect to run heavy duty applications. The Atom processor might not be the most powerful, but it’s quad core and has a decent burst speed, running at 1.6GHz with the ability to burst to 2.4GHz.

So how does it compare to the Surface Go?

The Surface Go comes with either a 64GB eMMC drive and 4GB of RAM or a 128GB SSD and 8GB of RAM. The processor is a Pentium Gold, which is dual core with 2 threads per core and clocked at 1.6GHz with no burst mode.

Spec wise, then, the old Surface 3 seems a bit better than the entry level Go with only the extra RAM and faster disk giving the higher spec model an edge.

The Go also has a smaller 10″ 1800×1200 display. It’s fractionally sharper in terms of pixels per inch but that doesn’t compensate for the lack of screen real estate.

If I want to carry a small, light device I’ll take my Android tablet. The Surface was great for times when I wanted to carry a full Windows machine without the weight of a full sized laptop. The Go seems to be too much of a compromise.

The other reason for wanting a full Windows machine is connectivity, and the Surface 3 wins on that front as well. The Go has a single USB C port while the Surface 3 has a USB 2 port and a mini display port. USB 2 is still more useful, and with the Go I’d have to invest in adapters. The only downside to the Surface 3 is that it charges over Micro USB, which is painfully slow.

Three years on from the Surface 3, it feels like the Surface Go isn’t much of an upgrade. I can see why Microsoft haven’t made it more powerful – presumably they don’t want to cut into the Surface Pro market and want to keep it to a budget price point. That budget price point isn’t so budget though – it’s just over £500 for the higher spec model. Add £100 for the keyboard and it’s getting to a price where there’s a lot of competition. For a brief period during their bank holiday sale Amazon were selling the core M3 Surface Pro – with a keyboard included – for £650. It’s now back to its usual price, but if I’d been in the market for a new Surface I’d have jumped at it.

So I won’t be buying a Surface Go but I’m glad it was launched – it gave me an incentive to revisit my old Surface 3 and discover that it’s now working perfectly again… it’s almost like getting a new gadget without the expense!