I’ve been a Wunderlist user for a long time. A few years ago it was bought by Microsoft and they’ve now announced that they’re discontinuing it and will replace it with a new app – simply called Microsoft To-Do.

This is a bit puzzling. Microsoft To-Do is, at the moment, a very basic, bare bones to-do app. Instead of using the code base they purchased in Wunderlist and rebranding it, it appears that they’ve written an entirely new app to do the same thing. But less, so far.

Although that seems like a daft waste of resources on Microsoft’s part, it doesn’t really matter to me. My needs in a to do list app are very simple – reminders. I just need to be able to create a reminder that will pop up on my phone at a specific time. That’s because I have the memory of a concussed goldfish – at least if you believe what may be myth about fishy memories.

If I need to buy something specific on my way home from work I need something to pop up at pretty much the exact time that I expect to be in the supermarket, otherwise I’ll find myself popping out again in the evening to buy the milk for my morning cereal. I’ve managed to go shopping for ingredients to make a sandwich and remembered everything except the bread.

I used to use endless sticky notes, but found them too easy to ignore. I’m in the habit of checking phone notifications, and having an Android Wear watch makes it even easier.

Almost all dedicated to do apps are overkill but I prefer to use a dedicated app rather than, say, clutter up my calendar.

So the very basic Microsoft To-Do was perfectly adequate, but I thought I’d take the opportunity to assess the competition. I was particularly interested in the options that integrate with the Amazon Echo – I liked the idea of being able to ask Alexa to add something to my list.

There are only two options – ToDoIst and Any.do. I gave them both a whirl.

Any.do was perfectly functional, but I was a little annoyed by the nagging to upgrade to the premium version. As much as I like the potential Alexa integration, I don’t need to pay for a ToDo app for the amount that I’d use it. If the functionality I need isn’t in the free tier then I’d be perfectly happy to stick with something like the Microsoft option.

Any.do’s design is also clearly optimised to fit in well on iOS. Even on Android it looks like an iOS app.

TodoIst, by comparison, adopts the Material Design look and so immediately feels more at home on Android.

Its killer feature, though, is the natural language method for setting reminder times. You can set a date and time the usual way, using typical on screen date and time selectors, but you can also just write it in your task description. If you type “pick up milk tomorrow at 10am” it will create a new task “pick up milk” with the reminder set for 10am tomorrow.

OK, so that sounds like more typing than necessary when it might be easier, especially on a phone screen, to just tap on a date and time. There is auto completion to make it quicker, but where it really comes into its own is when combined with the Amazon Echo integration. This makes it possible to say “Alexa, add buy milk to my to do list for 10am tomorrow” to create a new task with the reminder set. 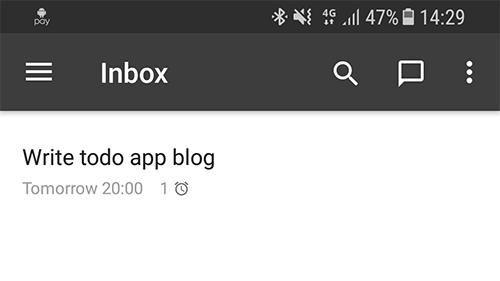 Now, when I’m in bed and suddenly remember something I need to do the next day I don’t have to get up, find my phone and add a reminder. I can just ask Alexa. It’s great! For me, this is a killer feature that takes Alexa from being a fun toy to being genuinely useful.