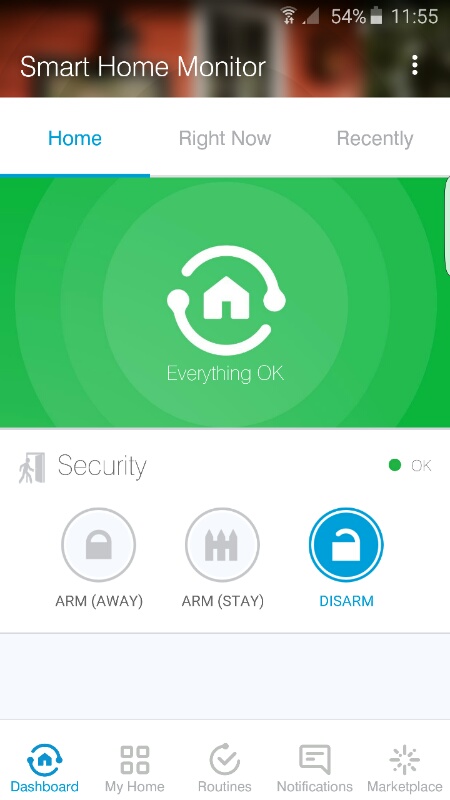 A few months ago I bought the Samsung SmartThings starter kit to start playing with home automation and the Internet of Things. After an attempted break in a couple of years ago I invested in an alarm system and some basic mechanical timer switches to turn lights on at night when I wasn’t home. The trouble with those is that you have to keep adjusting them for the changing sunset times. I liked the idea of something more sophisticated that I could also control remotely.

The starter kit comes with a hub that communicates with the SmartThings cloud service and acts as a relay to connected devices. Instructions are sent via a phone app to the cloud, picked up by the hub and sent to devices, and in turn devices can send state change information to the hub which relays them to the cloud. Schedules and rules can be configured to run automatically based on time or in response to events.

Setup was pretty straightforward. The kit has one plug and a few sensors, and I added a couple of compatible WEMO LED bulbs that can be controlled directly from SmartThings without requiring the WEMO controller. Manual control from the app generally works pretty well.

The problems come with automation. The kit has a presence sensor, which is a keyfob device that tells the hub when you’re home (assuming you take it with you when you go out), and it can also use your phone’s location as a presence indicator if you have location services switched on.

First step was to set up a rule that turns on a couple of lights at sunset if I’m away. That’s a two step process:

1. Set a routine to change the mode to “Away” when it detects I’m absent based on my phone’s location.

2. Set a routine to switch the lights on at sunset when the mode is set to “Away” 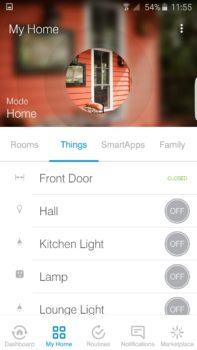 That’s where I hit the first snag. It just didn’t reliably change presence. Looking at the logs, I can see days where no presence changes are detected, despite leaving for work and returning in the evening. It was hit and miss.

That’s just one example and I’ll describe my workarounds in a future post. There are others. The point is, the platform isn’t quite there yet. Although you can buy it in Curry’s, at this point I’d say it’s not quite ready for prime time and I can imagine disappointed customers who expect things to “just work”. It doesn’t “just work”. Close, but no cigar.

My guess is that Samsung rushed it to market. Home automation is set to be the big new thing. Google have weighed in with the Nest platform, building it out from being a smart thermostat to a general purpose automation hub, and Apple are entering the race with HomeKit. Samsung wanted to get an early foothold, and having bought the SmartThings startup wanted to get the product out as soon as possible.

It has potential, and I hope the bugs get ironed out over time, but the early report is “must try harder”.

To do or not to do