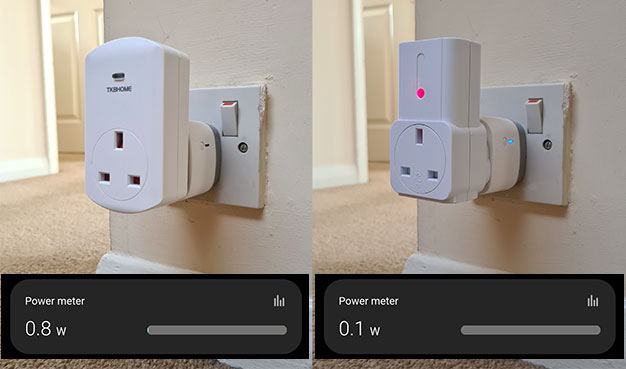 It started when I was rearranging my home office space to accommodate permanent working from home. I had plugged in a new six socket extension lead, and noticed that it got slightly warm, even with nothing plugged in to it. It has power surge protection, so I can speculate that the circuitry required for that is the reason, but it still seemed to be getting warmer than other similar extension leads I own.

I gave up on SmartThings a while ago, but I set it up again to use the smart plug, which is the only device I have that can measure power draw.

The new extension lead showed an idle draw of 1W even when nothing was plugged in to it. By comparison, another surge protected lead only drew 0.3W – presumably just to run the LED indicator lights. Better safe than sorry, so I decided not to risk the new lead. I ended up replacing it with an individually switched 8 socket model, so that I could switch devices off at the socket when not in use.

Of course, I could use smart plugs to switch things on and off, but what about the smart plugs themselves? They require power to operate, so the potential saving would have to outweigh the benefit. I tested a Z-Wave plug and one of my 433MHz plugs. I obviously couldn’t test the Samsung plug itself.

Switched off, and with nothing plugged in, the Z-Wave plug drew 0.8W and the 433MHz plug drew a mere 0.1W. The difference is to be expected. The 433MHz plugs are simpler – they respond to on and off signals but don’t report their status. The Z-Wave plug also acts as a repeater for the Z-Wave signals, helping to extend the range of battery powered sensors.

With a potential for savings using smart plugs, I set about figuring out where to deploy them.

Obviously there’s no point in using them for devices that need to switched on all the time. You wouldn’t put a fridge on a smart plug. At the other extreme I have an extension lead for my device chargers – micro USB, USB C and the dock for my Galaxy Watch. It makes more sense to use a switched lead for those. I need to go to them to plug the devices in anyway, so it’s no extra effort to switch the individual sockets on as required.

I do have some wall sockets that are hidden behind furniture and not easy to reach. Those are the best candidates for smart plugs, especially when the control can be automated. My TV is a good example. The socket is awkward to reach and the TV doesn’t need to be on standby when I’m out. Similarly, my main computer desk has an extension lead that hosts the PC, monitor, speakers, printer, and a router. I always power the PC down when I go out, but everything else is either on, or on standby. The idle draw for the computer setup is about 5W.

Of course the savings are marginal. A 1W device left on 24×7 will still only cost about £1.25 or so, depending on your tariff.

Investigating some devices, I discovered that my Sonos One speaker used 3.4W when idle and with the microphone switched off. With the microphone on, listening for voice commands, that rose to 6.6W. That’s when I questioned the value. I like the convenience of having the Sonos on and ready to respond, so my potential savings would be limited to when I’m out or asleep. Let’s say I switched it off for 2/3 of the day. That could save me about £5/year. That’s per device, and I have several, but even so the potential savings are limited.

That power use pales by comparison with my home automation setup. 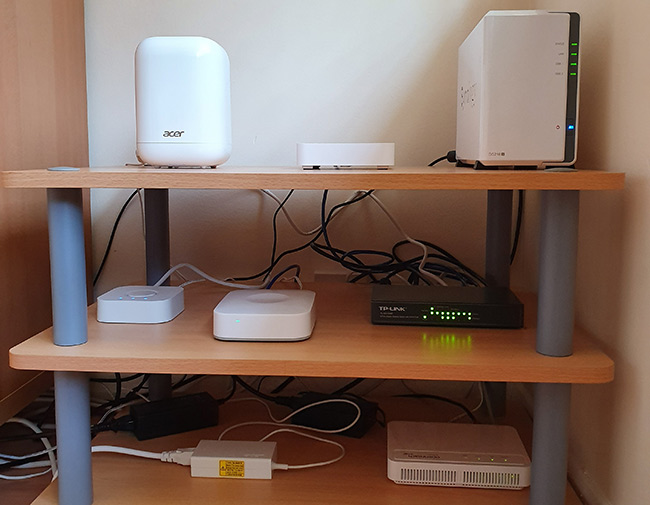 That consists of a mini PC that runs Home Assistant and various other things, a Synology NAS, Philips Hue hub, SmartThings hub, 8 port router (with one PoE port running a security camera), and a hub for my alarm system. The average draw seems to be around 45W, so that alone is costing me about £50/year.

All of which leads me to the conclusion that it’s not worth using smart plugs for power saving. Their real value is in things that benefit from automation, such as the windy weather automation that I set up to control an outdoor light.

I might have wasted a few hours doing the experiments, but at least my conclusions are now based on solid data, and that’s all that matters!