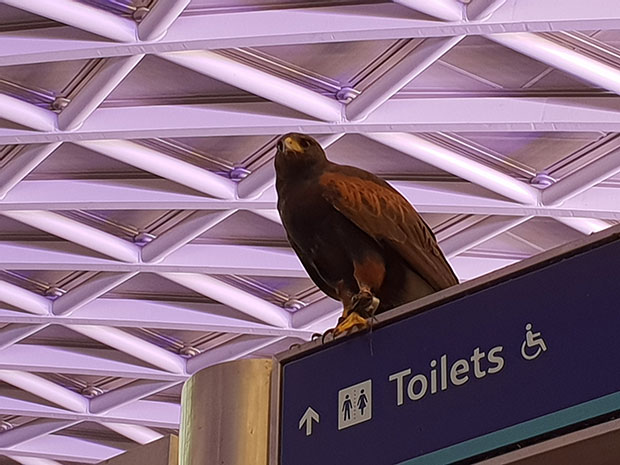 I recently had reason to regret not owning a phone with an optical zoom.

Walking through Kings Cross Station the other day I spotted a hawk that, I assume, is used to deter pigeons. I grabbed a quick shot with my phone, using the digital zoom. The results aren’t great. There isn’t much detail in the feathers of the hawk.

Using a digital zoom is more or less the same as taking an image at the default focal length and cropping it afterwards.

The 2x zoom will cover the same field of view as cropping an unzoomed image by halving both the horizontal and vertical dimensions. Obviously halving both dimensions leads to a quartering of the image area – a 12MP image will effectively become a 3MP image.

That relationship between the crop size, focal length and field of view might not be obvious, but it can be shown with some basic trigonometry. The easier way to demonstrate it is with an example. Take the following shots. The image on the left was taken with no zoom, the one on the right with 2x digital zoom:

Both images are 4032×3024 pixels at full resolution, so clearly the camera is scaling the zoomed image to maintain the 12MP resolution.

Cropping the first image to 2016×1512 pixels gives an image that covers the same area as the digitally zoomed shot: 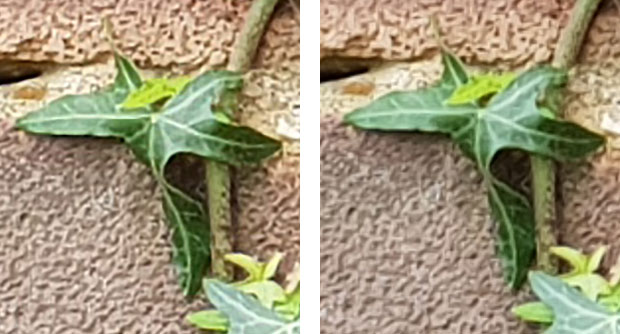 The size of the leaf in each image is the same, as you’d expect, but the first image is a bit sharper. It appears that cropping and then enlarging the image in Photoshop has given a sharper result than using the digital zoom. Both images were taken on a tripod, so it’s unlikely that camera shake was a factor. Photoshop presumably has a more sophisticated algorithm for upscaling images to a higher resolution.

It appears that it’s only worth using the digital zoom to save a bit of time cropping the image later, although it might also help with autoexposure as an in-camera zoom would enable the camera to expose for right area.

A proper second lens with double the focal length would clearly be better, right?

The answer is yes, but it’s complicated.

Unlike a zoom on a DSLR, each lens on a phone has its own sensor and the specs of those sensors can vary. The S9+, for example, has a 12MP sensor for the telephoto lens, which matches the main camera, but the pixels are smaller. That could lead to more noise, especially in lower light.

The Huawei Mate 20 Pro has a telephoto lens that is has 3x the focal length of the main camera, equivalent to an 80mm lens, but has an 8MP sensor. The main lens is 40MP but uses pixel binning to give a 10MP image. Clearly comparing like for like is impossible.

From examples I’ve seen, though, I think it’s pretty safe to say optical beats digital. Even Google’s Pixel 3, which uses machine learning to do clever interpolation to improve its digital zoom, can’t match the results from an actual telephoto lens.

So the answer to my hawk problem is a phone with multiple lenses, and the 80mm equivalent available on the Mate 20 Pro is certainly tempting. I’m more inclined to wait and see what Samsung brings out next year, though, as it’s not that long since I bought the S9. I’ve also seen plenty of sample images from the Mate 20 Pro, and have some reservations – it looks like post-processing heavily over sharpens images – especially at night, when it also seems prone to lens flare from light sources such as streetlamps.

I suspect the S10 will have three lenses, with an ultra wide lens in addition to the current telephoto. That would be good but not quite as useful as that longer telephoto. A second telephoto lens, to give the options of 26, 52 and 80mm equivalents, would be an ideal setup.