Carrying straight on from my last post, this is the second part of my look at Surveillance Station on a Synology NAS. 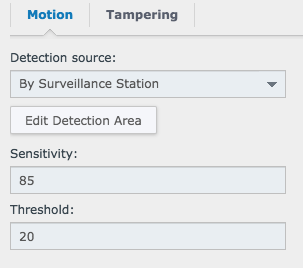 Secondly, if your camera has passive infrared (PIR) motion detection you may get more reliable results than you would by processing the image.

That said, I’m using Surveillance Station to handle motion detection. My camera can do it, but setting it up requires browser plugins that aren’t now widely supported. Since I only have one camera at the moment the load isn’t too great and it keeps all of the configuration in one place. I’m just using the camera as a raw feed.

As is always the case with motion detection parameters, experimentation is needed. You’ll need to tweak the settings until you get the right balance between missing events and false positives.

Despite the limited options for tweaking the motion detection, I’ve found I can get Surveillance Station to pick up events almost as accurately as Zoneminder. You can get a bit bogged down with the parameters in Zoneminder – there are almost too many options to play with. The main problem, as with any motion detection that works by comparing images, is that changes in light can lead to false positives. Shadows can be a real problem – I have a tree just out of shot and on a windy day when the sun’s in and out of the clouds I can end up with a constant stream of false positives.

When motion is detected, Surveillance Station ends the current recording and starts a new file. Although there’s an option to set pre- and post- recording times for the regular recordings those options don’t apply to motion detection recordings. It would be really useful to have that feature, especially if your motion detection area is less than 100% of the frame – a person entering the area might not trigger motion immediately so it would be good to have a little context either side of the detected event.

It’s not a huge problem if you’re recording continuously – you can just check the end of the previous recording or start of the next one – but is something to bear in mind if you only want to record motion events. Zoneminder can handle that with its buffer options, and is probably a better choice if you don’t want to record continuously.

Assuming you manage to get the motion events to a manageable level, you’ll want to be notified when they occur. There are three options – email, SMS and push. The email option lets you use any email provider that supports SMTP. You can customise the subject, attach a snapshot of the event and limit the number of events within a given time interval.

Finally, the push service allows you to use Synology’s email server to send to a verified email address or push direct to the DS Cam mobile app.

It would be good to be able to use something like Pushover instead, or call a generic web API. There may be a workaround – the SMS service seems to work with any provider that supplies an API endpoint that accepts certain parameters. In theory it would be possible to create an endpoint in Home Assistant to receive the messages and trigger notifications.

So far I’ve been comparing Surveillance Station with Zoneminder, as that’s what I was using before I got the NAS. Zoneminder isn’t the only option though. I had a quick look at other options, both open source and commercial, that run on Linux.

It’s worth mentioning in passing that there are other options that run on Windows. I didn’t look into them because I don’t have a Windows machine running 24×7, but they include the open source iSpy and the commercial Blue Iris.

Back to Surveillance Station and to summarise my thoughts it’s good but not great. It does everything you’d expect but there are a few user interface niggles, the motion detection could be better and there could be more options for notifications.

Is it worth it as a standalone recorder? Probably only if you already have disks available to use in a NAS. If you’re going to make use of the other features of your NAS then it’s a much more attractive proposition. I’d definitely recommend it as part of the overall package, just make sure you have other reasons for getting a Synology NAS in the first place.

Surveillance Station on the Synology NAS