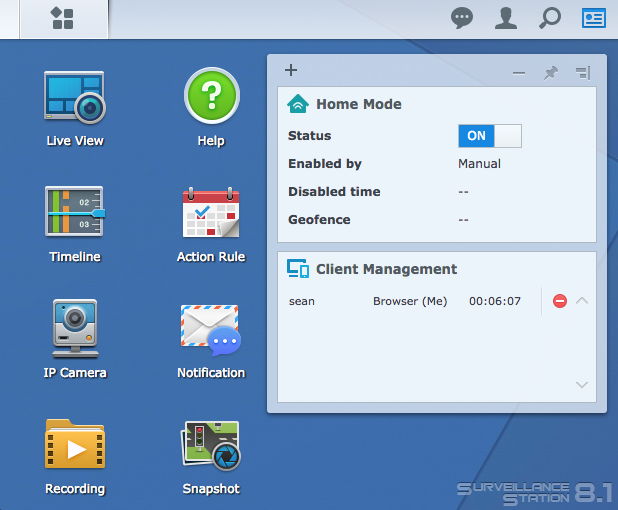 In my review of the Synology DS216J I said that the main reason I bought it was for Surveillance Station. So was that a good choice, or is it just as well that I’ve found plenty of other uses for my NAS?

Previously I was using Zoneminder, and in a previous post I explained why it’s not great for continuous recording. First of all then, it’s probably worth explaining why I want continuous recording in the first place. Is there any point in capturing video 24×7? 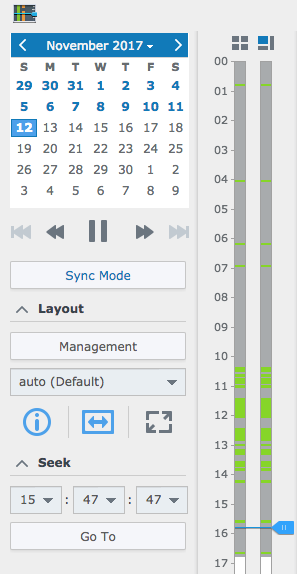 I think there is. For a start, motion detection is never 100% reliable. Make it too sensitive to motion and you’ll end up with hundreds of clips to sort through, drop the sensitivity too much and you risk missing the things you want to capture. On the other hand you don’t want to be scanning every minute of every day looking for events.

Continuous recording is especially helpful if you choose to limit motion detection to part of the frame, perhaps to avoid events being triggered by movement in areas covered by the camera but not of interest. For example, the camera that covers the front of my house also includes part of the street beyond. I exclude that from motion detection because I don’t want an event for every passing car or pedestrian. It can then be useful to be able to view either side of the motion event itself to get some more context.

Surveillance Station handles this with the timeline. If you have motion detection enabled, events are highlighted in green so that you can jump straight to them. 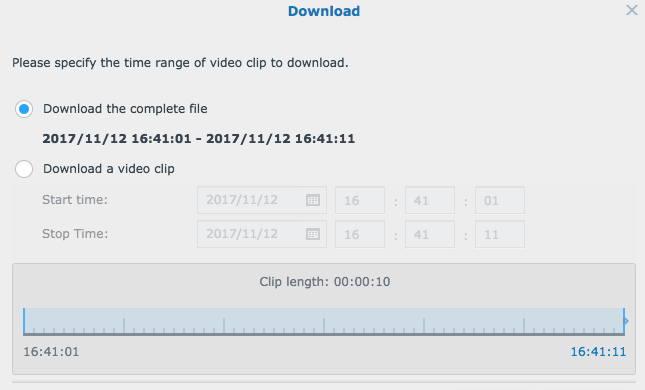 You can also find the individual recordings. Continuous recordings are broken down into chunks of a predetermined time but a new recording is started for each event. That makes it easy to export recordings of events, but you can also extract a section from any recording.

Navigation of the timeline could be easier. You can zoom in on the time but it’s hard to move forward through the video smoothly. You can play back at 2, 4 or 8 times normal speed but not drag through the video in the way that you can with most desktop video players. It can be a bit tricky to hone in on the detail that you’re interested in. You may find yourself jumping backwards and forwards to get to the right section and it can often be easier to export the entire video to your PC to scan through it. 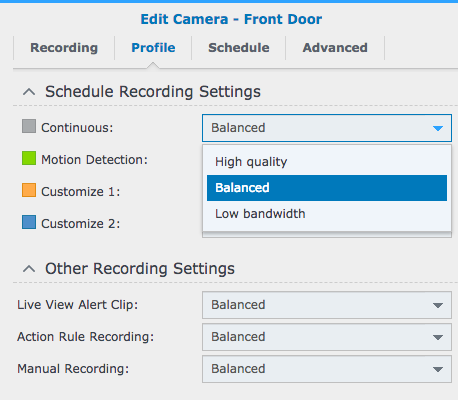 You’re not limited to continuous recording. You can opt to record continuously for part of the day and switch to recording only on motion detection at other times. If your camera supports different profiles with different resolutions you can switch between profiles on a schedule. You can also choose to record at the lower resolution except when motion is detected when you can have it switch to high resolution.

I’ve chosen to record continuously at the highest resolution my camera supports – 2688×1520. I’m recording at the second highest quality setting on the camera, and at 15fps with a variable bitrate. Experimenting with different settings has shown me that 15fps is more than sufficient for a security camera and that going to the very highest quality setting doesn’t make that much difference.

That uses about 5GB/hour during the day, dropping to 1.5GB/hr overnight when the camera is using infrared and recording in black and white. 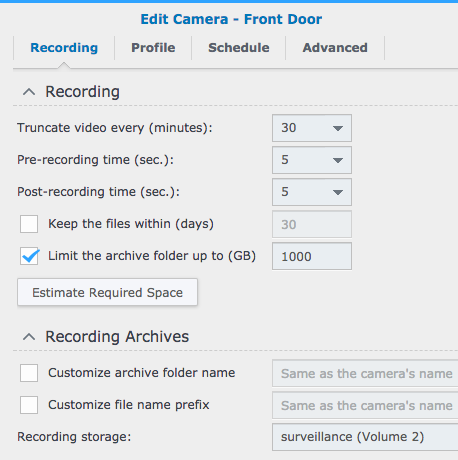 If I was running more than one camera I could easily adjust the settings to require less storage. HD resolution, 12fps and a medium quality setting would be probably be sufficient. I’m only running at the higher settings because there’s no need for me to limit it.

One of the advantages of Surveillance Station over Zoneminder is that you really don’t need to know much about your camera other than its IP address and credentials. As long as it’s on the supported camera list you can just plug in the details and it will handle the rest – a refreshing change from searching around for the stream URLs and figuring out what protocol you need to set.

You will almost certainly need to give it administrative credentials to your camera as it doesn’t seem to work with read only credentials. This is because Surveillance Station can set the camera’s resolution and image quality settings for you, and it obviously expects to have that level of access as I couldn’t get my camera working with a read only account. It would be nice to have the option , and maybe that’s something that varies according to the model of camera.

Overall, though, although it’s a bit clunky in places it gets the job done and is certainly better suited to continuous recording than Zoneminder.

As this is already quite a long post, I’m going to split it into two and next time I’ll be looking at motion detection and the notification options, as well as a quick look at other software that might be worth considering.