Technology’s great when it works and increasingly it just works.

When it goes wrong it can be both frustrating and amusing, as I recently found with Google’s location services…

I have Google location services enabled on my phone and let it monitor location history. Why on earth would I do that? What do I get in return for the massively invasive amount of data that Google collects about me, not to mention the adverse affect on the battery life of my phone?

Mainly it’s traffic information about my commute. Google knows where I live and where I work and knows when I usually leave for work. In return it tells me when the traffic is going to be worse than usual and gives me a running estimate of the time it’ll take to get home. It’ll suggest taking an alternative route if that’s quicker. It’s frighteningly accurate.

It’s basically crowd sourcing the data from every Android owner on the road who also has location tracking switched on to calculate the time it’s taking them to get from point A to point B, and applying that to my journey. Or any journey – the amount of data it must be crunching is mind boggling. 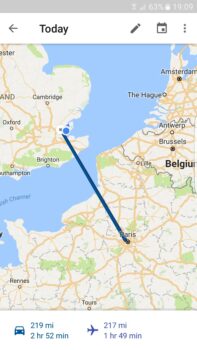 That’s all fine when it works.

To maintain some semblance of decent battery life I have the location mode set to battery saving so that it gets location from a combination of the cell tower and wifi. That’s usually accurate enough – cell tower triangulation can be pretty accurate, especially in areas with plenty of transmitters it can use to hone the data.

It appears, though, that we have a rogue transmitter near the office that thinks it’s in France.

For the last few days I’ve been getting Google Now cards telling me the Euro exchange rate and pointing out nearby attractions such as the Eiffel Tower and the Arc de Triomphe.

I’m putting it down to a glitch in the cell network because it doesn’t matter if I have wifi on or off and other people in the office on the same network are having the same issue. Putting GPS on corrects it, but only if I walk over to a window where I can get a signal.

It would just be a funny little glitch and good for a laugh – today I rather impressively drove 198 miles in 25 minutes, spent a few hours in France and then covered the 203 miles back in 35 minutes.

The problem is that when the phone thinks I’m in France it neglects to give me traffic information for my commute home. It also throws off a few location based automations I have, such as putting my phone on silent when I get to work.

In truth it’s a minor irritation and in a way it’s nice to know that Big Brother isn’t infallible.