The project this week is to use Tasker to send messages to our Zato ESB when we get notifications on the phone.

So let’s start with the Tasker end of it. I’m using the Notification Listener plugin because it ties in with the standard Android notification access permissions and exposes more than just the title of the notification.

When an incoming notification is received and the plugin is set up to listen, it populates a number of variables in Tasker, including:

What we’re going to do is send a message to our ESB with a few of these fields.

Let’s start off by creating a profile for notification events, selecting the apps we want. 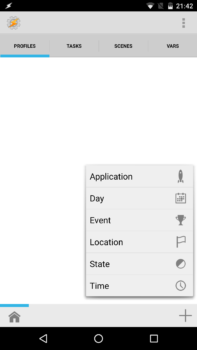 To do this, from the profile tab:

We should then see a summary of the variables that Notification Listener populates: 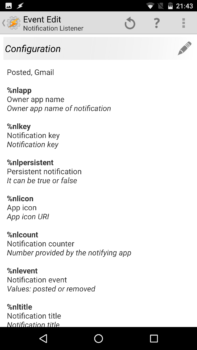 Now we just need to fill in the configuration for the message that we’re going to post: 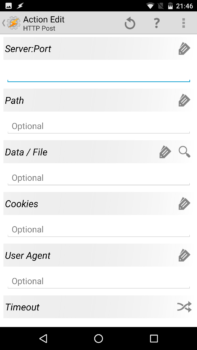 The server:port will be the hostname of our server. If we’re posting directly to Zato this will be:

We can also optionally use basic auth by prefixing the address with :@ – i.e:

The data / file section is where we build the post message, using the variable names that have been set by the listener: 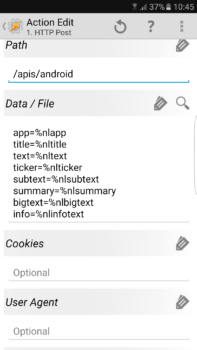 This will be URL encoded by Tasker when it sends the message, replacing the variables with their values.

It is also possible to change the Content / Type and build a different data format. For example, we could send the data as JSON instead, which would make things a bit simpler at the Zato end.

However, if we stick to the default URL encoding Tasker will manage the encoding of special characters for us. If we were to use JSON we’d run into trouble if one of our variables had, for example, quote characters in it.

It’s better to keep it as simple as possible in Tasker and let Zato handle the incoming format.

And so to Zato.

This uses the urlparse library and we’re logging various ways to see the data. Now we need to link this up to a service by creating a new plain HTTP channel in Zato: 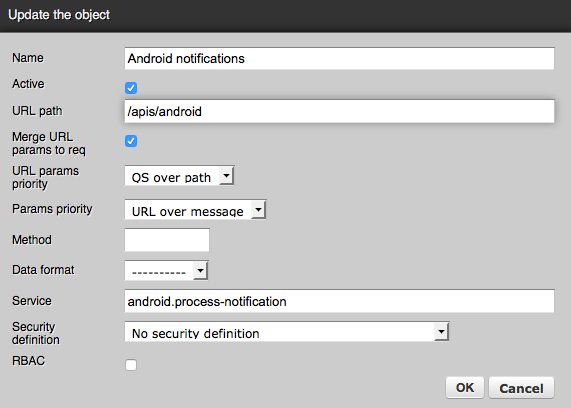 And we’re good to go.

If we send ourselves a test email, we can look at the logs and see the various ways in which we can manage the incoming data:

First of all the raw message. Note that if a variable hasn’t been populated within Tasker we’ll just get the variable name. This sort of logging is a handy way to see how different apps populate the Notification Listener variables:

Then parsed using parse_qs. Note that the parse methods have done the work of converting our encoded special characters back to text:

This method creates an array of values for each key. This is because URL posts can contain the same variable multiple times – you could have multiple titles, for example.

The parse_qsl version returns the key/value pairs as an array:

We can convert this one to a dictionary object if we know that there’ll only be one instance of each key:

Finally we can bunchify the result which allows us to refer to individual keys in dotted notation. The last log entry will just be:

Obviously we don’t need all of these logged, but this is just to illustrate the options. I prefer the bunchify method because it makes for neater code, but it’s a personal preference.

So what are the next steps? Ideally we want this available over the internet so that it can receive messages when we’re out and about and not just connected to the same network as the server. That requires a bit of setup and some thought about security, and it’s something I’ll talk about in a future post.

As for the practical uses, they’re pretty much unlimited. Why use IFTTT when we can do it ourselves?