When I reviewed Samsung’s SmartThings I mentioned that presence didn’t work reliably. It seems to have sorted itself out, and it’s possible that the issue wasn’t really with ST in the first place.

I was using my phone as a presence indicator, and using a Samsung phone. I now suspect that Samsung’s power saving feature might have been the root of the problem, killing the ST app in the background so that it couldn’t register presence. It might explain why it was hit and miss as well – if I’d recently used the app, it was running and so registered presence, but if I hadn’t needed it for a couple of days it would’ve been culled by the power saver. 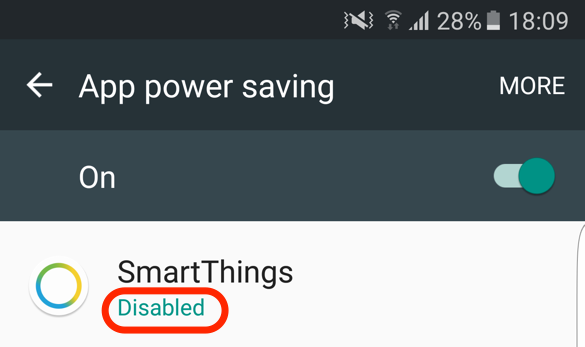 Disabling power saving on a per-app basis is simple. Go into the battery settings and tap “Details” under App power saving. Find the app you’re interested in and set the power saving to “disabled”. Since doing that, the presence indicator has been pretty reliable. Although occasionally it seems to think I disappear for a while in the early hours of the morning…

That said, I’m not using the built in ST presence with my phone. When I leave the house with my phone I want several things to happen. I want to switch off wifi, switch on bluetooth and tell ST I’m away (i.e. set the mode to “Away”). When I get home, I want to do the reverse – wifi on, bluetooth off, mode to “Home”.

To do that I use a combination of Tasker and SharpTools.

Tasker is an Android automation app with a comprehensive set of features and a rich plugin ecosystem… and a user interface best described as “quirky”, but that’s another story. SharpTools is a third party app for managing your ST devices from your phone, and it has a plugin for Tasker so that you can trigger ST actions from tasks. Neither Tasker nor the SharpTools plugin are free, but they’re well worth a few quid.

I just have Tasker call the SharpTools plugin to set the mode, and then use the SmartLighting app from the ST marketplace to run actions. That lets me have two separate routines for ensuring the lights are on when I’m out:

A routine to turn the lights on when the mode changes to “Away” if it’s between sunset and sunrise.

The second is needed because the first only triggers at sunset, so if I left after that the lights wouldn’t be switched on.

The Tasker method only works if you’re using a single presence sensor. If you want things to happen when “everyone leaves” with multiple sensors you’ll need to stick with the ST routines. It works for me though, and with the added benefit of being able to run other actions unrelated to ST when I leave.