So I now have a Netatmo thermostat and it’s been working for about a week. This is a two part review and today I’m looking at initial installation and setup. Part two will come in a few weeks when the predictive elements should have kicked in.

First of all the installation. It wasn’t as straightforward as I was hoping. I was replacing a two wire wall thermostat, so I didn’t need the adapter connected to the boiler. I thought it would as simple as taking my old thermostat off the wall and replacing it with the Netatmo. 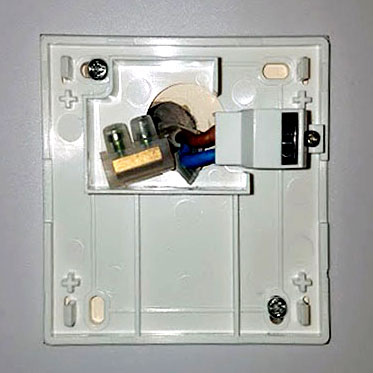 I also had to shorten and then strip the insulation from the wires coming from the wall, as there wasn’t much room for the excess in the wall plate. Not a big job, but a bit fiddly. I also had an earth wire in the old cable, which wasn’t needed. The Netatmo plate doesn’t have terminals to park unused wires, so I had to add a terminating block. If you’re OK with wiring a plug and drilling holes it’s more fiddly than difficult, but it’s not a five minute job.

Incidentally, the wires shown in my picture are the control wires described in the manual as black and grey – the original cable just happened to be standard mains cable, hence the colours. 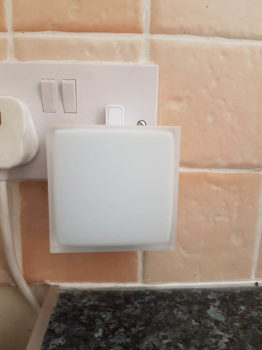 Once that was done, I plugged in the relay. Unfortunately almost all of my wall sockets have extension leads plugged into them, and as you can see from the picture it’s not really designed for that as it would block the neighbouring socket. I can see why they’ve done it that way, as it looks neater and has no trailing cables when plugged directly into the wall, but I’d imagine that most houses are lacking spare wall sockets.

I did find a home for it, and the next step was to get it onto my wifi. This works by using bluetooth to connect to the phone app, and then configuring the wifi password through the app. I’d heard this could be difficult and it took a couple of attempts before it accepted the configuration, but it got there in the end.

The trick seems to be to ensure you don’t switch away from the Netatmo app during the process – I made the mistake of opening my password vault to copy the wifi password and when I switched back to the Netatmo app it had lost connection with the relay. It worked second time around with the old fashioned method of actually remembering the password and typing it…

The setup is a one time thing though, so a few glitches there aren’t a big deal.

Once installed, setting the schedules was a piece of cake. The setup wizard asks a few questions about your routine and what temperatures you find comfortable and creates a schedule based on your answers. You can then adjust this as necessary. Rather than directly set a temperature it uses labels for your preferred temperatures – for example “Comfort” and “Night”. Scheduled times use the labels, so if, for example, you increased the “Comfort” temperature it would be reflected in all scheduled instances of that label.

Temperatures in the schedule are colour coded from cool to warm colours. I obviously seem to like a cold house, as most of mine are blue. The 19°C that I set for the evenings when I’m slumped in front of the TV is still considered by Netatmo to be a bit chilly and it’s not until you reach 20°C that the colour changes to green. Warm oranges and reds start to come in above 21°C. There doesn’t seem to be a way to customise the colours, so your schedule might look a bit monochrome if you’re like me and just put an extra layer on in the winter. 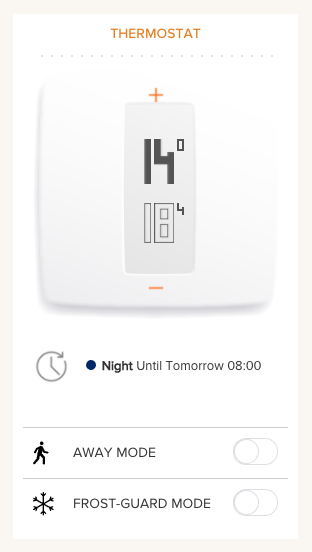 You can also manually set an away mode if you’re not home outside of your normal expected schedule. This lasts until it’s manually changed, as I discovered to my discomfort when I was out one evening, forgot to switch the away mode off when I got home and woke up to a cold house the next morning… the manual override would probably have been a better choice. Away mode is probably best saved for when you’re away on holiday.

Netatmo has both IFTTT support and an API, so there are plenty of options for automation. I’ll be exploring these in part two. I should also have an idea by then of how well the heating prediction works to ensure the house reaches the right temperature at the right time.

Overall, though, I’m happy with my choice. Let’s hope I still feel the same way in a few weeks time.