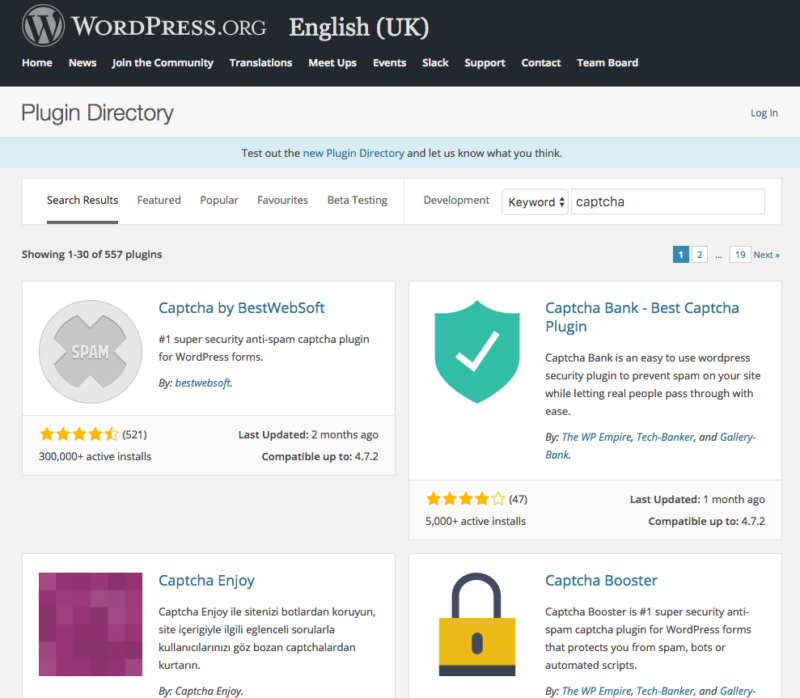 The strength of WordPress lies in the vast number of plugins available, allowing you to add everything from comment form validation to an entire shopping cart system.

There are so many, though, where do you start? If you search for a plugin to perform a function you’ll find dozens that do the same kind of thing. How do you choose?

Let’s say, for example, you want a plugin to add a captcha to your comment form to reduce spam (in case you’re not aware, the captcha is the little box with obfuscated numbers and letters that you have to type to submit the form). A current search reveals over 500 plugins.

So what do you look for?

The number of installs is the first indicator. A plugin that only has a few downloads might be great but the popular plugins are more likely to work well – hopefully any bugs will have been ironed out and there’s a better chance of the plugin working smoothly regardless of your theme. The top plugins will have hundreds of thousands of active installs.

Secondly, look at the rating. Reviews are only a guideline, but if a plugin has a four or five star rating the chances are it’s better than a lower rated one – as long as there are enough reviews to go on. A five star rating from a single reviewer doesn’t tell you anything. A four star rating from several hundred reviewers, on the other hand, is a good sign.

That’s not to say that a rarely used, hardly updated plugin is necessarily no good – but, honestly, why take a chance when there are so many others to choose from?

A good indicator of compatibility is whether the plugin has been updated recently. If it hasn’t been updated for years, steer clear and look for plugins that have been updated within the last few months at most. It indicates that the developers are still active.

All of this matters because badly coded plugins can add security holes to your site. Since a plugin is just a collection of PHP code, Javascript and CSS you can read the source yourself, so it’s unlikely that a plugin would contain code that actively compromises your site. That doesn’t mean they couldn’t inadvertently introduce vulnerabilities . Again, look for popular and regularly updated plugins that are more likely to have had scrutiny.

After that, it comes down to trial and error. I’d advise anyone working with WordPress to run a local installation using WAMP, MAMP or a local Linux machine for testing. Install and activate the plugin and see how it works. Does it fit with your theme? Can it be customised to do exactly what you want? Does it clash with other plugins that you use?

Theming is important. There are plenty of plugins that offer limited options for styling and could stick out like a sore thumb in your theme. I certainly hit that problem with this site – having gone for a broadly material design look and feel, I found various plugins that couldn’t be made to fit the theme. Being able to customise elements is useful, but far better if the plugin lets you add your own css classes to any display elements or applies minimal CSS and inherits from your own styles.

You could edit the plugin code to make it fit, but that really is a last resort – every time you update the plugin it would overwrite your changes. You could also write your own plugin or just incorporate the code directly into your theme, but why reinvent the wheel when there are so many good ones already out there?