It’s hard not to think that Jeff Bezos is a volcano hideout and a white cat away from being a Bond villain.

The anti-Bezos faction will also claim that he is using his ownership of the Washington Post to push an agenda that benefits him.

At first sight, this headline seems to a be sending a clear message: 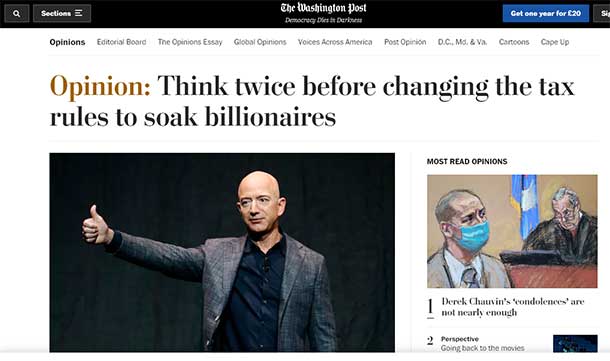 It makes a good screengrab as it sounds like a self serving defence of the ultra-rich not paying their dues. The article is actually far drier than the headline suggests – yes, even the venerable Washington Post resorts to clickbait. The article is actually talking about wealth tax – taxing assets that are held, as opposed to capital gains tax where only the income from assets is taxed. It’s a far more complex question than the reductive “newspaper owned by billionaire argues that billionaires shouldn’t pay more tax” argument. There is absolutely a case for reducing or eliminating various loopholes that allow companies to avoid existing taxes, but introducing a new wealth tax is a more complex question.

It’s also worth touching briefly on another headline that is often cited, and one that was changed after a backlash – although the URL still reflects the original headline: 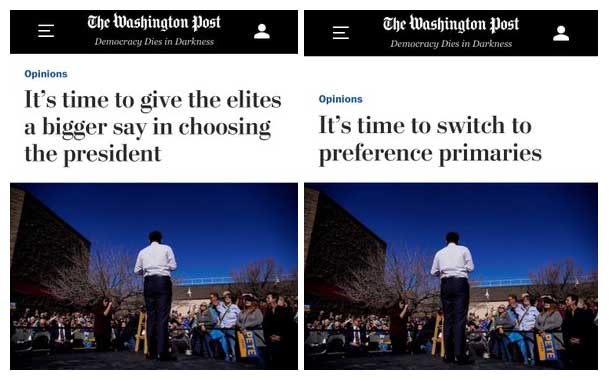 I’m even less qualitied to talk about that one.  Again, though, I think the headline was clickbait and the word “elite” was a poor choice. It’s actually a fairly technical look at the arcane process of US primaries, something that I don’t pretend to understand.

So I think we can discount editorial meddling from Bezos. What else is wrong with him and, by extension, the company that he built?

According to the press, the richest man in the world has achieved that position by relentlessly exploiting his workers and avoiding tax. Is there a case for boycotting Amazon?

Starting with the charge that Amazon treats its employees badly, it seems that there is a case to answer. There are numerous articles on the subject and it seems that Amazon might be realising that the bad publicity needs to be addressed, with Bezos writing in April that “it’s clear to me that we need a better vision for how we create value for employees — a vision for their success” and detailing initiatives to improve Amazons’s record on workplace injuries.

Is Amazon worse for drivers than the competition? I think the last line of this article is telling. It’s a quote from the owner of a delivery service partner, a third party company that delivers for Amazon and is subject to Amazon’s rules, where he says that drivers “learn how to drive from us and if they get good, then they can go to UPS or FedEx and get a raise.”

The use of delivery service partners in itself shows that Amazon is trying to avoid responsibility for its drivers by not employing them directly. They’re Amazon employees in all but name and, more importantly, corporate liability.

Amazon is undoubtedly convenient for customers, but its treatment of employees does seem to make a case for at least trying to avoid buying from Amazon.

It’s not all rosy for customers either. It’s probably fair to say that Amazon has accelerated the decline of traditional retail, and – much as I might sound like an old man shouting at a cloud – I think that’s a bad thing. For many items there is no substitute for seeing the product before buying. Clothes are the best example, and I know that if I can’t actually try something on in a shop I’d end up having to go through a loop of ordering something online, returning it when it doesn’t fit, and trying again. That’s far less convenient.

Allowing small companies to sell through Amazon does have an upside though – it gives small businesses access to a massive market and lets them take advantage of Amazon’s delivery logistics. Far from killing retail, it’s possible to argue that Amazon has allowed more businesses to enter retail, increasing competition and choice.  That is, until Amazon notices that a product is selling well and decides to add it to its Basics range and undercut the original seller…

The benefit to small companies is not entirely good for consumers and trust is critical. When I see an item I want on Amazon I always check to see whether it is being sold directly by Amazon or is simply being fulfilled by Amazon and sold by a third party. If the latter, do I trust that third party? Is it a company I’ve heard of? Can I be sure I’m getting an item that is genuine and made to UK safety specifications?

That level of doubt leads me to avoid Amazon for most big ticket items – especially electrical goods. I’d be reluctant to buy a TV or laptop through Amazon. I hit this problem with IP based CCTV cameras – there are a ridiculous number of almost identical cameras being sold under a range of brand names, all rebadging of one base model and almost certainly all made in the same factory. There are bargains to be had, but they entail taking risks. For cheaper items it can be worth taking a chance, but if it’s something that you plug in to the mains, it’s better to be safe than sorry and I’d prefer to buy from a high street retailer.

To cap it all, Amazon apparently destroys unsold items and returns, sending them to recycling centres and landfill sites.

If true, that’s inexcusable. The report mentioned face masks in sealed packs… I mean, really? In a pandemic? They really couldn’t find anything better to do with brand new facemasks? And what about laptops? There are charities crying out for donations of laptops for the benefit of underprivileged children.

There are plenty of reasons, then, for me to avoid Amazon. What would I be losing?

Convenient deliveries, cheaper prices, access to products that are hard to find elsewhere, a streaming device that works better than most of the competition, a friendlier name for the voice assistant, and cheaper music streaming…

But being ethical isn’t always easy. Maybe it’s time for me to make more of an effort to avoid the Amazon behemoth.