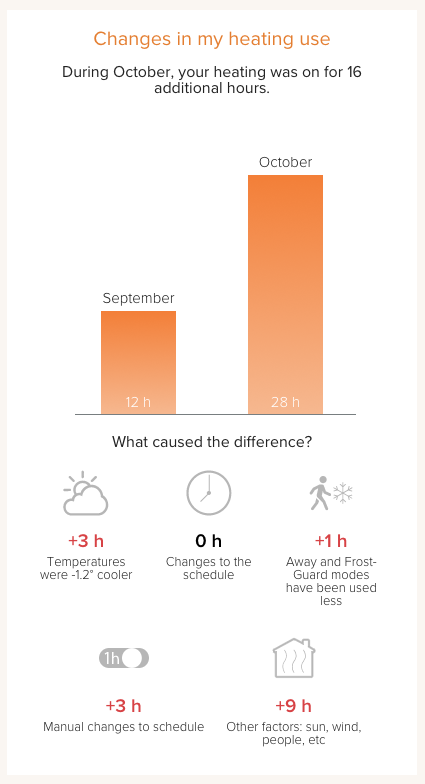 Remember my review of the Netatmo thermostat? It’s hardly surprising if you don’t as it was back in March. I promised part two “in a few weeks”. Oops. I wouldn’t have been able to add much – by the time I’d had it for a few weeks the weather had improved and I didn’t need to make much use of the heating.

Now that autumn is here and it’s getting colder, I’m starting to use the heating more. I can even tell how much more, thanks to Netatmo.

So what’s good and what isn’t, is a smart thermostat worth it and am I happy with my choice?

The Netatmo sits somewhere in the middle of the pack when it comes to actually being smart. Unlike some, such as the Tado, it does not have geofencing built in to the software, so it can’t tell when you’re out. It certainly doesn’t have the Nest’s ability to learn your preferences without a schedule. The main smart feature seems to be the ability to predict how long it will take your house to reach a target temperature based on a combination of the weather and historical data that it builds up over time.

There are normal thermostats that avoid this by using a Proportional Integral Derivative (PID) algorithm, turning off before the set point is reached to allow the room to warm to that point naturally, and then boosting the heat as required to minimise the oscillation.

Netatmo’s algorithm is a variation on that PID algorithm but with access to additional data such as the outside temperature and the heating characteristics of the house. It works well enough that I can set the temperature target half a degree lower than I did with my old thermostat as the slightly lower constant temperature is more comfortable than the fluctuations around a slightly higher temperature.

The real advantage for me so far is with the scheduling. My old thermostat had two options – I could either set the same schedule every day or have one schedule for weekdays and another for weekends. I work from home one day a week, so I always had to manually override the schedule on that day. The same at weekends – my usual Saturday and Sunday routines are different enough that they really need their own schedules.

With the Netatmo I can have a different schedule for every day of the week and as many set points as I need for each day. I really like that level of flexibility.

Would it be better to have a really smart thermostat that knows when I’m out or learns how I like the temperature? I’m not so sure, and I’m actually glad I didn’t go down that route.

For a start, what’s comfortable one day might be less so another. It depends on how I’m feeling and what I’m doing. If I’m just watching TV and not moving much then I might want it warmer. If I’m upstairs in the study using the computer, in a room that gets quite warm anyway, I don’t need the heating set so high. That’s going to vary from day to day and the schedule is just a guide. I’m not sure I’d want an algorithm trying to figure that out. It’s probably easier to set overrides for the schedules than to constantly battle an algorithm that thinks it know best.

Surely, though, it’s worth having one that can handle geofencing? Again, I’m not so sure.

A smart thermostat might know I’ve gone out but it can’t know how long I’m going to be out.

Perhaps I’ve just popped to the supermarket and it’s not really worth turning the heating off and letting the house cool down for what might only be half an hour.

Some of that can be automated. If I’m at work it’s a good bet I’ll be there all day and if I’m leaving work at 5pm there’s a good chance I’m on my way home. I’d actually rather build that logic in myself than have an automated system do it for me. The Netatmo API should allow me to do that, and it’s something I’ll be exploring soon, in conjunction with Home Assistant.

I might be wrong, and maybe something like the Nest is clever enough to work it all out. I’m just not ready for that level of automation.

On balance, then, I’m happy with my choice. I think the Netatmo manages to get the balance right. It gives me the flexibility I need without trying to be too clever and most importantly it has integrations I can use for future automation.