If you have smart light bulbs, such as Philips Hue, you’ve probably noticed one little problem…

The bulbs need power so you need to leave them switched on at the wall. It’s not a huge power drain – they just need enough power to run the Zigbee radio that communicates with the hub. The problem is that it’s really hard to get out of the habit of hitting the light switch to turn them off. I’ve lost count of the times I’ve wondered why my lights aren’t responding to automations or Amazon Echo commands, only to realise that I’ve switched them off.

So what’s the answer?

The really simple solution is to cover the switches so that you can’t accidentally use them. You can buy covers designed to do just that. 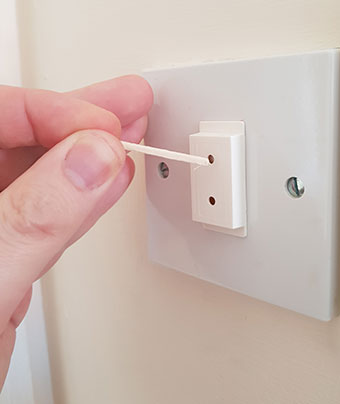 I bought a pack and gave them a go. The covers come with a roll of double sided tape to stick them to the wall plate over the switch. The covers have two small holes in them to allow you to manually operate the switch with the aid of the included “dabber” – which is just a small wooden stick you poke through the holes. That’s handy for those times when you need to switch the power off at the wall without having to remove the cover entirely. If you lose the dabber you can replace it easily enough – just cut the head off a matchstick.

So far, so simple.

The other problem, though, comes if you have guests. Do you teach them the commands for Alexa? Do you give them access to the app? Wouldn’t it actually be better if they could just turn the lights on and off at the wall?

Philips sell a couple of options – the dimmer and the tap switch.

The dimmer is battery operated and you can stick the back plate to the wall or use it as a handheld remote control. It’s not a UK standard size, and it’s not designed to cover an existing switch. It would be great if it could cover the wall plate while still allowing access to the original switch, as that would look a bit neater.

There is an option for that – someone’s come up with a 3D printed cover for a UK switch that can incorporate the Hue dimmer. It looks like a great solution if you want to keep things as neat as possible, but I opted to stick the dimmer to the wall next to the switch. 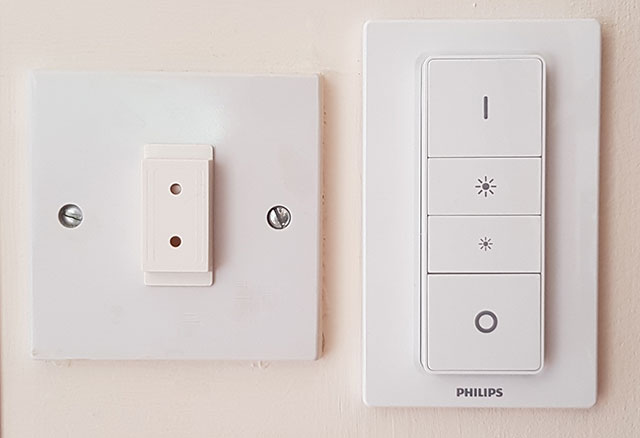 One weird downside of the dimmer is that it you can only set it up to control a room and not an individual light. I have three Hue lights in my living room – the main overhead light and two lamps. I only want the wall switch to control the main light – i.e. to replicate what the wall switch does. I had to create a separate room containing only the main light just for the switch.

It’s not a big deal for me as I don’t really use the room functionality, as most of my lighting control is done via Alexa controlling individual lights or through Home Assistant, but it’s still a strange limitation.

The dimmer can be bought for around £20. The tap switch is £50, which makes it too expensive if you’re looking for something for every room.

If you want a really cheap option, and have a Home Assistant set up with a 433MHz transceiver, there is another way. I wrote last time about using 433MHz doorbells. You can buy the bell push separately, and there’s nothing that says you have to use it as a doorbell. A £5 bell push makes a handy generic switch and you could use one as a light switch.

All you need to do is discover the switch Id to put into your sensor configuration:

And then create an automation that toggles a light when a signal is received from that sensor: 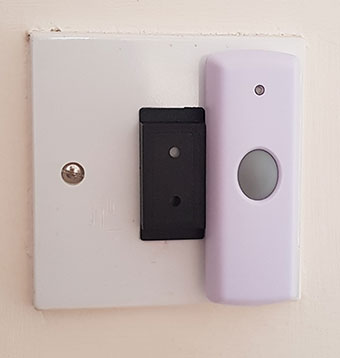 It’s not the neatest thing in the world, but it works and it’s cheap. It’s fine for my study ( i.e. “spare room where the computer is”), where the appearance isn’t that important. If I was going to use it in another room I’d probably want to come up a solution like the 3D printed cover for the Hue dimmer so that I could centre the bell push over the switch.

Ultimately the solution you choose depends on your needs. You might be happy with simply getting into the habit of not using the wall switches, or you might find that the switch covers are enough. Personally I like having the ability to control my lights as normal from the wall as an option – sometimes it’s just easier to hit the switch, especially in rooms that are out of earshot of Alexa…